I signed up for the Tilden Tough Ten (TTT) as a training race for my first trail half marathon, the Lake Chabot Trail Challenge. The TTT looked like a fairly straightforward course at Tilden Regional Park, one of my favorite East Bay parks. Hosted by LMJS, a local running organization of which I’m a big fan, TTT bills itself as the “alternative to Bay to Breakers madness.” TTT is also the first race in the East Bay Triple Crown, which I didn’t realize until Wednesday. As a result, it draws a lot of top runners in the area. (Case in point: two runners finished under an hour last year. Speedy!) Needless to say, this was not a race in which I was expecting to finish in the top half of my age group. I was more aiming towards ~200 out of 300 overall. Also, with my recent running problems (overtraining, heel pain), in addition to a couple of other personal health issues that I was dealing with (nothing serious), I just wanted to go out and have a good race. My goals were to run a consistent pace, to run most of the hills, and to not bonk at mile 8, which was the place that gave me a lot of trouble during my 2 previous runs at Nimitz Way.

The alarm clock went off at 5:45 a.m. and I crankily wondered to myself why I was waking up so early on a Sunday. Luckily, that grogginess didn’t last and before I knew it, the Gypsy Runner and I were pulling up to Inspiration Point, the race start/finish site. We met up with KH, RH, and AEW, who were all running their inaugural TTT race too. KH and I hit the port-a-potty line when it was only 3-4 people deep (it eventually was so long that they held up the start of the race until the line was finished). There was a short speech by the organizers about this being the 25th Anniversary of the TTT, and an ill-fated description of the course, including “it’s impossible to get lost” and, “there will be a volunteer at the turnaround.” Famous last words.

Even though the race is capped at 300 people, that still made for a tight start. Also, the race was both gun and chip timed, meaning that the race started with the gun, but finished with the chip. We self-segregated into pace groups — the Gypsy Runner, RH, and AW at the front, and KH and I at the middle/rear.

Here’s the mile-by-mile breakdown of my race:

Mile 1 (9:58): I wanted to start off not-too-fast, and I thought this was a good pace. KH and I kept each other company, with the mutual understanding that if one of us wanted to pull ahead, we should feel free to do so.

Mile 2 (9:46): KH and I managed to maintain a good clip while conversing without too much difficulty.

Mile 3 (9:25): A steady downhill made this a fast mile. Took my first Clif blok. My fuel plan worked out well: 1 blok every 2 miles and a couple sips of Cytomax at every mile.

Mile 4 (9:57): The first big hill of the race. It was a significant hill, but it was also spread out over a long enough distance that it seemed less intense.

Mile 5 (10:28): Unchartered territory off of the asphalt onto the uneven terrain of Mezue Trail (though nothing as bad as last week’s race). Slowed down due to loose footing and downhill scrambling.

Mile 6 (12:54): This was the toughest mile by far, physically. I lost KH as she jogged up the hill, while simultaneously pulling an empty Gu packet out of her butt. She had it tucked into her shorts to avoid littering but it somehow slipped down to her butt crack! So at least I had some entertainment and a few laughs as I jog/walked up the huge hill. By the top, I was huffing and puffing so hard I was sure I was going to choke on my Clif blok.

Mile 7 (10:17): I think this mile and the next one were the hardest of the race mentally. I just kept telling myself that as soon as I finished this mile, I only had 5K left. I also started dumping water on myself at every aid station to cool down. Worked like a charm, though my technique could be improved. I would either get myself straight in the eyes, temporarily blinding myself, or down the front of my shirt. I felt like I was entering a one woman wet t-shirt contest. Next time, I’m going to pour the water down the back of my neck.

Mile 9 (10:28): Nothing too memorable, though I think this was where the photographer was stationed. I managed to see him from far away and did some cheerful poses. I probably looked like a dork, but at least I wasn’t slack-jawed and panting.

Mile 10 (10:04): One last, tiny hill just before the finish seemed much bigger than it was. It was nice that they had mile 9.9 marked to let you know when to start sprinting. My Garmin has my pace at 6:06 at the finish!

The elevation profile from my Garmin. Doesn’t look too bad on paper, but felt pretty tough in real life.

Once I made it past mile 8 and didn’t bonk, I felt really great, even though I knew I could’ve run a faster race if I had pushed it. I felt satisfied that I ran the race that I set out to run that morning, and I knew that I’d have plenty of energy to finish the race strong. I purposely didn’t want to leave it all out on the course and end up exhausted, especially with a very challenging half marathon coming up in 2 weeks. I wanted to finish the 10 miles and know that I could do 3 more at the end if I wanted to. A day later, my body is not very sore at all, which tells me that I didn’t push too hard. It’s cool to realize that not every race is a PR and that I’m starting to use different races for different purposes.

I’m sure you’re wondering, “What’s so tough about the Tilden Tough Ten?” Here’s what I think:

One thing that made it tougher this year was the turnaround issue I alluded to earlier. Here’s what the race directors had to say:

Please accept our apologies for the race logistics out on the course today.  We made some assumptions that resulted in significant errors on our part about the course.  We were unaware that there was a race held at Tilden on Saturday (this has never happened in previous years and therefore wasn’t on our radar of possible planning issues) and as a result the course markings were confusing even for our volunteers on the course.   Markings left over from the other race which led some runners the wrong way.  This also resulted in our bike patrol taking some wrong turns and missing the turn around for the race and hence no one being there.  We realize in hindsight that we will need to have someone more experienced with our particular race do a sweep of the course prior to the start in order to prevent this from happening in the future.  We hope you accept our apologies with the understanding that this and all other matters brought to our attention will be addressed in our 2013 TTT Race Plan.

This was an unbelievably huge mistake and hard to fathom considering that this year’s race was the 25th anniversary. In an otherwise impeccably organized event, you’d think this is the one thing that the race directors would make sure was right. Why would they send an inexperienced volunteer out to man the turnaround? Just unbelievable. The good news for me was that, since I was at the back of the pack, the mistake was fixed by the time I got to the turnaround. However, the runners towards the front, including the Gypsy Runner, weren’t so lucky. While still running to the turnaround, the Gypsy Runner heard someone yell that they had already run 5.3 miles (the turnaround was supposed to be at mile 5). There were runners even farther ahead of him. So, for an out-and-back course, the leading group must have run an extra 0.7-1 mile. This was also in the most hilly, least level part of the course, making that extra mileage a even harsher blow. Not to mention that the runners behind them, seeing that there was a problem, started turning around earlier, so that they could avoid the same mistake. Thus, when the Gypsy Runner turned around and saw all of the runners who were originally behind him now a ways in front him, he became so frustrated and angry (understandably) that he lost his motivation to run any further. He ended up walking the rest of the way back. I joked with him later that this will probably be the only time that I finish ahead of him. He didn’t kill me and managed to respond with a weak laugh, so I think he’ll be OK. One good thing is that he managed to win a raffle prize! A $30 gift certificate to… See Jane Run, a women’s running store. Oops. So, it really wasn’t his day, but I made out with a $30 gift certificate. Heh.

The rest of our group did great! AW finished in 1:26 (running 10.2 miles), RH came in at 1:31, and KH kicked my butt by finishing in 1:39. As my friend MS heard from a fellow runner last year at Lake Chabot while slogging up a huge hill, “The hills pay the bills!” True dat! 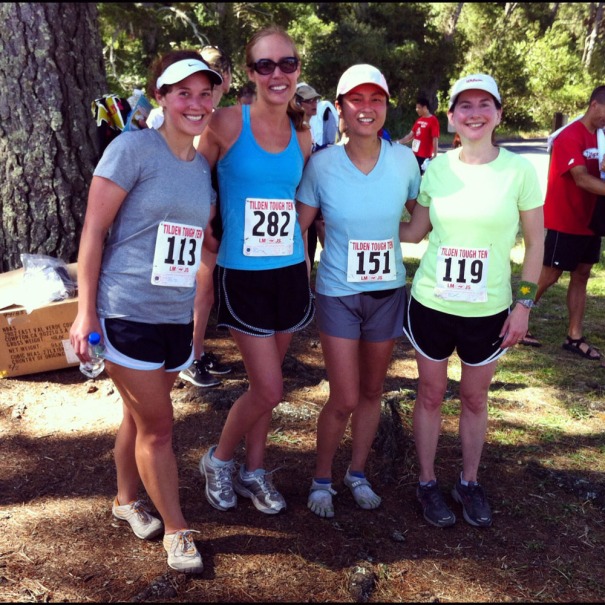 Happy to be finished with the Tilden Tough Ten!

Overall, I had a good race. I’m ambivalent about running this again, not because of the turnaround problem, which I’m sure they’ll never repeat again, but because the course is not my favorite. And let’s face it, it’s tough on the ego to come in at 201 out of 256, even though I know I didn’t run my fastest race. But then again, it’s a race that could become a good benchmark to measure myself from year to year. Also, having friends at the race always makes it more fun, and I had a blast chatting with KH for the first half. So, who knows if I’ll run TTT again. We’ll just have to wait and see.

p.s. AW isn’t just a faster runner than me, but a faster blogger too! Her recap can be found here.