This race is aptly named. It is, by far, the most challenging race I’ve ever run. I signed up for the Lake Chabot Trail Challenge (LCTC hereafter) hoping to test myself and see if I was ready to endure the pain and agony of a marathon. Little did I realize what I was in for. The Gypsy Runner and I had run around Lake Chabot 3 times previously, but always on the 9-mile loop hugging the lake. I’ve never run the 1-mile monster hill on the Live Oak/Towhee trails. So maybe I was a bit optimistic when I set my A-goal at 2:30. I had just run 10 miles at the Tilden Tough Ten at 1:44, and had enough left in my tank to run a few more miles. Plus, looking at previous years’ East Bay Triple Crown results, runners with my TTT time ran the LCTC at around 2:30-2:40. So, with that in mind, my goals were:

Leading up to the race, I had relied on the Brazen Bad Bass half marathon course profile, since the information on the organizer’s website was scant at best (more on this later). However, 2 days before the race, the Gypsy Runner pointed out that the course differed in a few parts, so any information that I thought was right — especially the elevation profile — was now uncertain. So with that in mind, my strategy was to run what I could and walk the steep parts. No big deal, right?

We woke up race morning with mostly cloudy skies and temps in the low 50’s. In other words, perfect running weather. Despite the chill in the air, I knew that the sun was probably going to come out eventually, so I opted for a sleeveless tank and shorts. I was also aware that it was going to be LONG race, so I made a playlist even though I usually don’t listen to music while I run, and especially not at races.

As it’s our M.O., we arrived in plenty of time to check-in, use the bathrooms, and warm-up. Close to the starting time of 8:00 a.m., we met up with the Gypsy Runner’s dad and sister who were running the 5K, and EH and KH who were joining us in the half marathon. There was a weird start “line” set up of small orange cones for the half marathoners, while the 5K runners had a more legitimate looking line (we were going in opposite directions). Looking around the half marathon runners, I saw some familiar faces from the Tilden Tough Ten. Just about everyone looked like real runners — in other words, another very tough field of competitors. 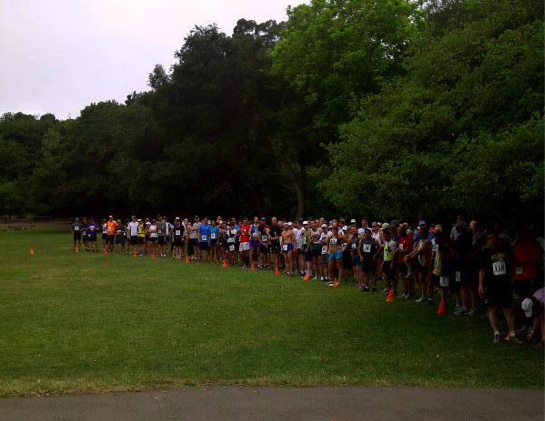 Shortly after 8:00, we were off! I’m almost ashamed to post my splits, just because they are so freaking slow (where was that headband when I needed it??). But, it is what it is, and who am I to sugarcoat everything? I’m still a new runner (relatively) and let’s face it — not every race is going to be a PR or even moderately successful. Also, maybe my splits will be helpful to anyone else who wants to run this race in the future. 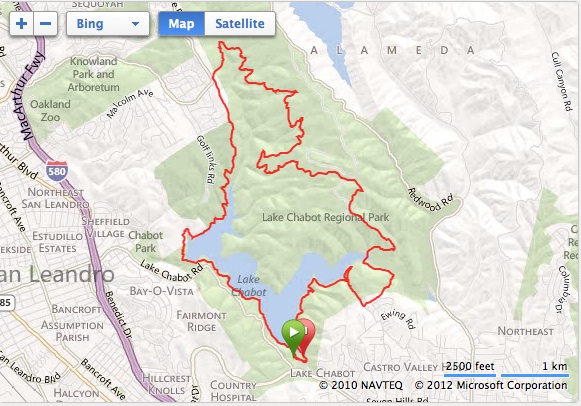 The course, according to my Garmin.

My race profile — elevation in green, speed in blue. 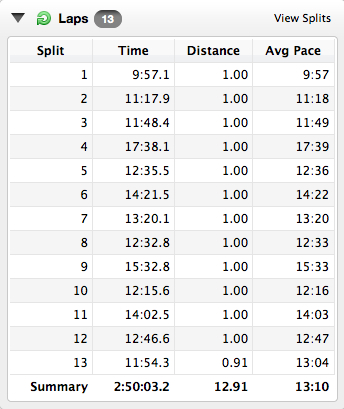 My split times (ugh). These are a bit off, because my Garmin is not completely accurate on trails. Also I forgot to stop my watch after crossing the finish line.

One unusual part of this course is that we had to run through the finish line in the first 400 meters or so. The first 2 miles, which were on asphalt, were mostly uneventful. I tried to rein it in to save some energy, but of course they were my fastest miles. At the end of the first mile, I had to stop for a potty break — making it the first time I’ve ever had to stop during a race. I tried to go as quickly as possible (my Garmin says I took about a minute or so). It broke up my rhythm but I did manage to catch up to the same group I was running with pre-potty break. Success! I also received some lighthearted jabs about my running form from EH, which was much nicer than the two ladies I passed minutes later mocking my Vibram Five Fingers within earshot. Why they didn’t wait until I was farther ahead is beyond me.

Then we left the asphalt and hit the dirt. The first hill came at Cameron Loop, the end of the second mile. This one was steady and moderately steep, but I managed to run/jog it at an OK pace. Then came a descent and a wooden bridge, followed by a short flat portion. I should’ve been able to get into some sort of rhythm here, but I was already starting to feel fatigue. And that was all before I met my fate with the mother of all hills: the dreaded Live Oak/Towhee trail. Are you familiar with the song, “This is the song that never ends”? Well, the following is what was playing through my head the whole time,

This is the hill that never ends.

And it goes on and on my friends…

At least I had a lot of company trudging up that hill, which was over 1 mile in length and over 500 feet in elevation gain. This hill alone accounts for the “challenge” in my opinion. All of the other hills are definitely doable, but this one almost broke me. I felt so exhausted by the end that even during the flat-ish portions where I attempted to jog, I had to stop because I was breathing so hard. This was the first time I wanted to quit and I had only run 4.5 miles. Not good at all. I knew right then and there that I definitely wouldn’t be able to make my “A” goal. My “B” goal was still in reach, but honestly I was just fighting with myself over whether I even wanted to accomplish my “C” goal. I was very tired physically, but it was a bigger battle mentally. Plus, my compatriots from the hill were all seemingly able to dig deep and press on, while I had extreme difficulty recovering. Fortunately, I still had KH and EH with me for this grueling part of the race. We didn’t run together, but we took turns passing each other and exchanged brief hellos at the aid stations. Halfway through the race, the course took us near the Lake Chabot firing range. I had a morbid, amusing thought that the race directors purposely did this to motivate us to run faster.

After the hill from hell, the rest of the hills were rolling for the most part. Even though they weren’t bad, I was spent and basically walked almost every hill for the rest of the race. I kept going back and forth between wanting to run harder and giving up altogether and just walking the rest of the way. Then, I’d be mad at myself for wanting to give up. You can imagine how unproductive this thought cycle was.

Anyway, even though I felt horrible, the scenery was beautiful. As I was slogging up yet another hill, KH jogged past and pointed out the lovely view and the flowers next to the trail. I thought to myself, “Well, it could definitely be worse.” EH, KH, and I kept each other within range until the second to last aid station (about 8.5 miles). Then they took off. After that, I never saw anyone else for the rest of the race. The sun finally came out and I was running up an exposed hill, where I continued to wrestle with my thoughts and motivations. I finally decided to call in the backup troops: my for-emergency-purposes-only playlist. All I have to say is thank God for Bruce Springsteen and “Born to Run.” That song might have been the key ingredient to pushing me to finish. I’m pretty sure I was even lip syncing at one point, but I didn’t care who saw me. It was a desperate situation.

Finally, I got to mile 10 where I was more familiar with the trails due to previous runs. I also thought to myself, “Only 5K left. You can totally do this.” The small hills continued to pose a mental and physical challenge, so I jogged/walked them for the most part. As I reached the marina, I wanted to stop so badly but I still had 0.5 miles left. I kept up a slow jog and saw a volunteer before the final turn yelling, “200 meters to go!” That was a nice touch, and usually, I’d try to kick those last 200 meters, but I just didn’t have it in me. Those 200 meters felt like the longest, slowest 200 meters ever.

I came around the corner and saw the finish line, with the Gypsy Runner and his mom cheering me on. I thought about smiling but that seemed like it would take too much energy so I just put my head down and focused on crossing the finish line at 2:48:56. I was in such a daze that I forgot to stop my watch until about 2 minutes later. Oops. The volunteers congratulated me for finishing and grabbed the bottom of my bib for their records, as another volunteer took a picture of me with a digital camera. Yet another volunteer offered me water, only to realize that there was none to be had.

Luckily, the Gypsy Runner came to the rescue and got me a bottle of cold water. I quickly learned that he finished at 1:46:34, first in his age group, and 20th overall. This was an impressive time, not only because of the difficulty of the course, but also because it was his first half marathon! In fact, before yesterday’s race, the Gypsy Runner had not run more than 9 miles. That man is truly an amazing runner. He also won one of the raffle prizes: a strawberry rhubarb pie from Sweet Adelines. I also found out that KH and EH finished a couple of minutes ahead of me, and the Gypsy Runner’s dad and sister both did awesome in their first 5K’s ever.  After the race, we cleaned up, pigged out on chicken mole, and passed out in a food coma. Today, I treated myself to my first ever sports massage and it was AWESOME. More on that later.

The Gypsy Runner is a champ!

My running buddies through 8.5 miles, KH and EH.

This was the toughest race I’ve ever run, hands down. I was so frustrated at various points with how tired I was and how poorly I was holding up, physically, mentally, and emotionally. I’ve never wanted to quit and just walk the rest of the way as much as I did during this race. It was definitely an exercise in suffering. I’m not pleased with how I handled the challenges of this race, but at least I was able to pull it together enough to achieve my C goal. I feel if I had been slightly less wimpy about everything, my B goal was definitely within reach.

In terms of viewing this as a test of whether I’m ready for a marathon… well, I guess that’s a bit like comparing apples to oranges. I think that a road race is almost always going to be easier than a trail race, but I also know that a marathon has its own set of challenges. I also know that I didn’t prepare for the LCTC nearly as well as I would’ve prepared for a marathon.