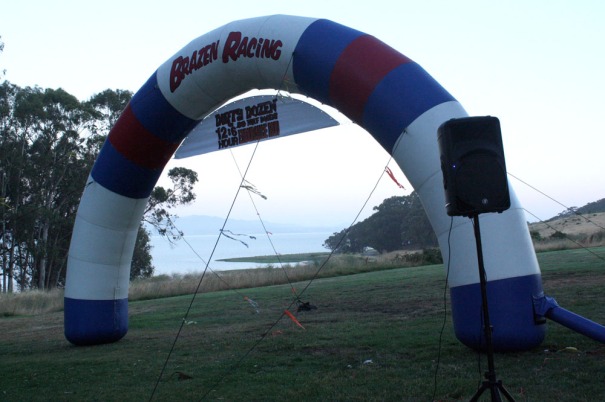 Two Saturdays ago, the Gypsy Runner and I volunteered at Brazen’s Dirty Dozen 6 and 12 hour endurance event. We had been wanting to volunteer for a while now for a few reasons: to get credit toward a free race, to give back and support other runners, and to see what volunteering is really like. We chose this race in particular because it was one that we definitely didn’t want to run. No offense to the runners who participated, but I have ZERO interest in running the same 3.3-mile loop for 6 hours. Little did we know, though, how exhausting volunteering would be. I reckon that it’s its own endurance sport!

Once we decided to volunteer, I shot off an email to Jasmin, the co-director at Brazen, and she quickly responded that she’d love to have us. We were granted our request to work at the aid station and I also volunteered to bring my camera to snap a few photos whenever I had time. Race morning arrived, and we awoke bright and early in order to make it out to Point Pinole to help set up at 5:30 am. I don’t think I’ve ever gotten up this early for a race, so that was interesting. When we got there, the signature Brazen arch and the port-a-potties were already in place. We helped to set up the tents that would eventually cover the registration tables, the aid station, and the food area. In the process of tent set-up, the Gypsy Runner cut his eye brow open. I had just come back from using the bathroom when I saw his head seriously bleeding! Luckily, it looked a lot worse than it actually was, but it was still pretty scary. 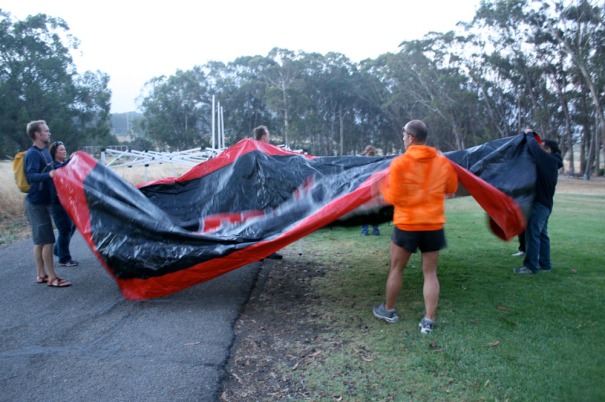 Tent set up. It takes a small village!

Racers eventually started rolling in around 6:00 am for the 7:00 start. Meanwhile, Sam, the other co-director, played 100 different versions of “Dirty Deeds” over the loudspeakers. We tried to set up what we could at the aid station, but it was a bit confusing since we had never done this before. Jasmin had her hands full with race set up, so we helped when we could, but mostly stood around until the race started. I took a few photos of the tents/personal aid stations being set up around the finish area. It’s a really unique race, in that it’s not expected for most runners to run the whole time. Many will stop to eat, drink, take bathroom breaks, change clothes and/or shoes, and some might even take naps. You could also race in a relay team of 2 or 3, which seemed more feasible to me. There were also two 5Ks and two 10Ks that day, held at the end of each 6 hour period to motivate the endurance runners to keep going (or to make them feel even slower and more tired, depending on how you handle that kind of thing). 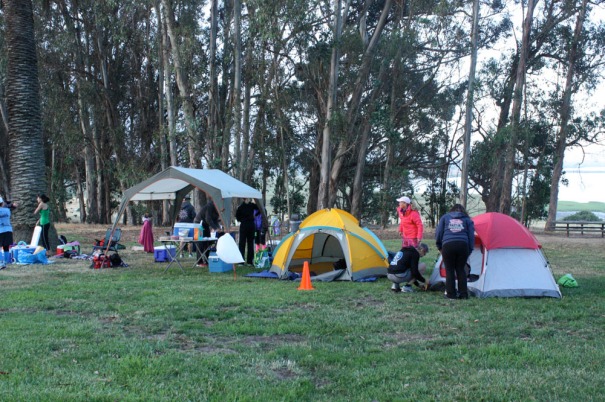 Racers setting up their camps for the 6 and 12 hour events.

Anyway, once the race started, it was non-stop aid stationing for me and the Gypsy Runner. We spent the next 7 hours filling drinks, refilling all of the food, making PB&Js, and making sure the runners got what they needed — whether that was ice, sunblock, or medical attention. As Jasmin put it, it was supposed to be the Ritz-Carlton of aid stations. Initially, we handed water and sports drinks to the runners, but quickly realized we did not have the time to do that. Fortunately for us (and unfortunately for him), Isaac, a runner who ended his race after 4 or 5 laps due to injury, lent us a much-needed hand for a couple of hours. He was a life-saver — thanks Isaac! 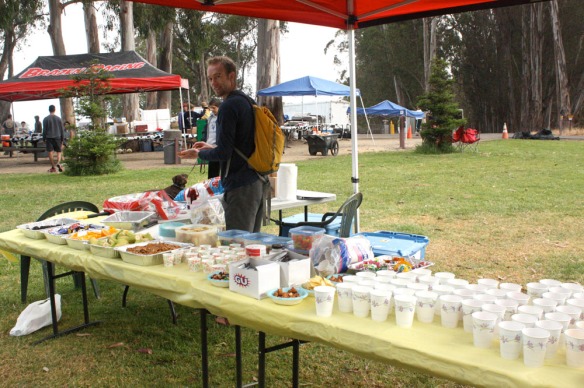 Many runners expressed their gratitude and a few told us we were awesome, which I really appreciated (of course). Some were able to keep a good sense of humor despite the fatigue, while others were too tired to do much beyond a faint smile and grab whatever they needed. Then, as you might expect, there were a couple of real jerks. One woman kept coming through and barking demands at us, without a single thanks. She then complained, “Is this all of the food you have??” I might mention that the food included: potatoes with salt, chips, all sorts of candy, Gu, pretzels, PB&Js, trail mix, cookies, cinnamon rolls, peanut butter pretzel bites, candy bars, oranges slices, bananas, and more. I don’t know what she expected. Another guy yelled at the Gypsy Runner because we didn’t have Coke. I don’t know if they realized this, but:

Anyway, besides those rotten apples, we both thought it was really fun and rewarding to volunteer and we’d definitely do it again. Even though it was tiring, I didn’t mind the constant work. The time definitely passed very quickly! We also got some good food (there’s a BBQ associated with this race) and tech shirts. I’d definitely recommend volunteering to all of the runners (and spectators) out there. It’s definitely an interesting and worthwhile experience. 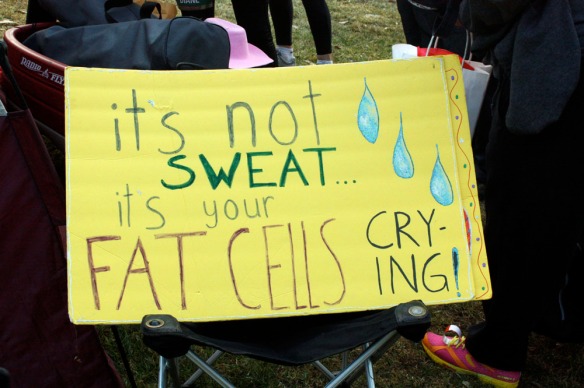 6 comments on “Paying it forward”