This past Saturday, I ran the Zoom Point Pinole Half Marathon in Richmond, CA. I signed up with the intent of treating it as a tune-up/dress rehearsal for MCM. It was affordable, local, and relatively flat for a “trail” race (more on this below). I had also managed to convince Cathryn and bt to register, which exponentially increased the excitement/fun index. And secretly, I was hoping to run a sub-2 hour half marathon, something that has eluded me on my last 3 attempts.

In addition to the secret sub-2 target, I had other goals in mind, which I tweeted about on Friday:

In thinking about all of my road half marathons, one common theme prevailed: I always blew up in the last 2-3 miles. I remember wishing, on more than one occasion, that a half marathon was actually a 10-mile race. I’ve also felt the strongest at mile 6-7 at several half marathons. Obviously, none of these things are indicative of good race execution. I wasn’t sure if my tired, marathon training legs would get me the sub-2, but I was hoping that at least my brain would learn a thing or two about half marathon pacing.

Race Day:
Cathryn and bt drove up bright and early from the Peninsula to Oakland, and I drove the 3 of us to Point Pinole. Considering the heat wave that hit the Bay Area just the week before, we were very fortunate to have overcast skies, cool temps, and a decent breeze. We checked in, got our bibs, and collected our shirts in short order, then walked back to the car to deposit the shirts and make last-minute bathroom stops.

Cathryn was in on my secret sub-2 plan, and seeing as how she’s achieved that benchmark 3 times in the last year, we hatched a super secret plan to run together and have her pace/encourage me to the finish line. We also agreed that at any point, we would split up if it was becoming too much of a chore to stick together. This plan essentially threw half of my race goals out the window, but that was okay with me. It was all a fun experiment of sorts and I was excited to see how it would turn out. 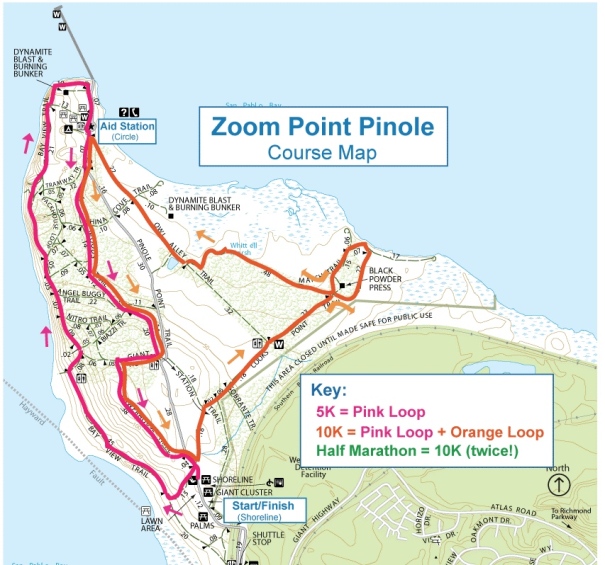 There were 3 race distances on Saturday: a 5K, a 10K, and a half marathon. It doesn’t take a rocket scientist to figure out that two 10K’s don’t make a half marathon. I kinda assumed that the 10K must be longer than 6.2 miles and that the half marathon was 13.1 miles. Well, I was right about the 10K, but wrong about the half… but more on that later. All 3 groups started at the same time, with the 5K runners on the left side following the pink ribbons and the 10K and half marathoners on the right side following the orange. The half marathon course was 4 loops: orange, pink, orange again, and pink again. Before the race, I thought this might be annoying because I usually hate repeating loops, but I actually found this particular course to be okay.

We started off relatively conservatively for the first orange loop and chatted comfortably. I wanted to start easy, warm-up, and then turn up the effort. Neither of us had run in Point Pinole before, so we both took in the views of the water and Eucalyptus trees. It was quite pretty and peaceful.

This is what a lot of the shoreline looked like. (source)

I noticed that I seemed to be putting in significant effort without much in return. More than 80% of the course was on crushed rock/gravel, which made it really difficult to push off efficiently. It’s not nearly as bad as running in sand, but it’s similar to that feeling. I was afraid that I was the only one experiencing fatigue so early on, so I was relieved to hear Cathryn express that she also felt like it was hard work. My Garmin indicated we were off to a slow-ish start, averaging 9:20/mile for the first 2 miles, which contributed to the feeling that a sub-2 was not in the cards after all. However, I eventually realized that my Garmin was losing satellite signal, so I stopped paying attention to pace and just focused on effort. 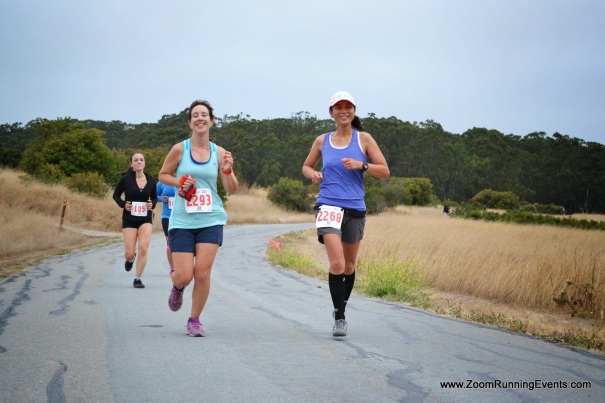 Putting on our best smiles for the camera. (Photo credit: Zoom Running Events.)

We eventually finished the orange loop and started on the pink. If I had to be honest, I knew I was in trouble even though it was early on in the race — I was already feeling really tired after only 3+ miles. But I wasn’t going to give up, so I followed Cathryn as we began the first pink ribbon loop. About a mile in, we encountered the one gnarly hill of the whole race. I put my head down and pushed through it, knowing I’d probably have a much harder time the 2nd time around. I took my one Gu at ~45 minutes into the race and stopped at the aid station to get a cup of water. As the aid station was a bit off the main path and I didn’t want to run off with the cup, I ended up spending about 30 seconds of precious time drinking water there. 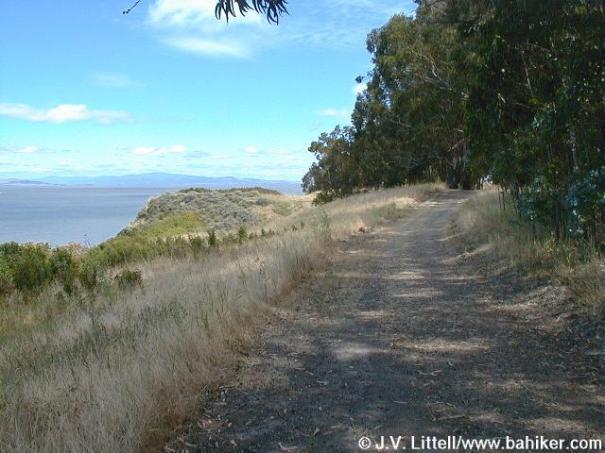 View from the pink loop. (source)

We finished the 1st orange + pink loop in ~58 minutes. Without that number, I would’ve totally given up because I was feeling so tired already and we were only halfway done. But, as Cathryn pointed out, if we kept it up, I still had a chance at a sub-2 half. So, onward we went. I got a small boost of energy at the beginning of the 2nd orange loop, partially from the Gu kicking in and partially from Cathryn’s zany playlist, which she played from her iPhone. We bounded down the trail and passed some people, which also perked me up a bit.

From about mile 8 to the end of the race, it was a constant mental and physical struggle. I started to dissociate and daydream about the finish line and even what I’d write in the race recap. Eventually, I realized that wasn’t helping, and settled in on focusing on the present. I quickly realized that the mantra “I’m strong” doesn’t really work when you’re not feeling strong at all — not even the slightest bit. I ended up focusing on the mantra of “THIS MILE.” It didn’t matter what was going to happen later on, if I was going to get my sub-2 or whatever. What mattered was how I handled THIS MILE. So, I set my eyes on Cathryn’s purple trainers and just followed wherever they went. I also practiced surging, increasing my pace every once in a while, since that’s supposed to get you out of a rut. I don’t know if it worked, but at least I was running a little faster, even if it was only for a couple of seconds at a time.

The last loop was all a blur. One thing I do remember is walking up the last part of the gnarly hill and getting mad at myself because it was *nothing* compared to the hills I encountered just 2 weeks ago at Skirt n’ Dirt. Mostly, I just recall following Cathryn and going back and forth between counting down to the finish and trying to stay in the present. When we finally came upon the last little downhill that led to the finish, I looked down at my watch and realized that it would be close. Very close. I had less than a minute to cover what seemed like a tenth of a mile. The good news is that it was partially downhill; the bad news is that there was an abrupt right turn followed by a 50-100 m straightaway to the finish. Cathryn took off, yelling something as she went. I tried my best to follow, heaving loudly as I ran towards the finish. As I turned the corner, the race clock showed I only had 10-20 seconds left until the 2 hour mark. I knew it was going to be tight.

I stopped my watch as I crossed the mat. My Garmin read 1:59:59, but I figured that my official time was probably a little over because I saw the race clock go to 2 hours right as I finished. It ended up not mattering because I soon found out from Wendell, the race director, that the half marathon course was 12.95 miles. So, I didn’t run a sub-2 half or a PR pace after all. Slightly disappointing, but I was still proud of myself for hanging in there when times got tough.

After catching my breath, I ate about 10 slices of watermelon and drank a few cups of water. Then, Cathryn and I watched as bt came through the finish chute looking strong. We celebrated our victorious day by donning our too-bright race shirts and meeting up with the Gypsy Runner for super delicious Mexican food.

After brunch and coffee at Tacubaya. (Photo courtesy of Cathryn.)

So, let’s review those goals, shall we?

I’m counting this race as an overall victory: I gained a decent chunk of mental training, the course was scenic, the race was well-organized, and I had lots of fun with Cathryn and bt. It was a great day all around.