Why I wanted to run this race:
For my birthday, the Gypsy Runner suggested that he pay for race entries so that we could run a race together, which I thought was a *perfect* idea.  Coincidentally, Inside Trail was offering a 15% discount on race registration, and when Cathryn also decided to join in on the fun, I was sold.

Goals:
Nothing solid, considering my post-MCM binge eating carb-fest (a.k.a., my trip to Taiwan).  In the back of my mind, I thought it would be awesome if I could finish in 2:30.  However, having not run longer than 11 miles or on any hilly trails for over a month, I decided I would be happy beating my time from my first trail half marathon at the Lake Chabot Trail Challenge — 2:48:56.  Trail races are hard to compare, but both LCTC and Woodside had similar elevation gains of 2000’+.  Another equally important goal was to have fun.  This was my birthday present, after all, and I wasn’t going to spoil it by being too hung up about my performance.

The Course:
The half marathon course runs between Huddart Park and Wunderlich Park.  Some of you might remember that back in the summer, I had run some of these trails with Cathryn (see: my post, her post).  I thought the trails were gorgeous.  Tough, but gorgeous! 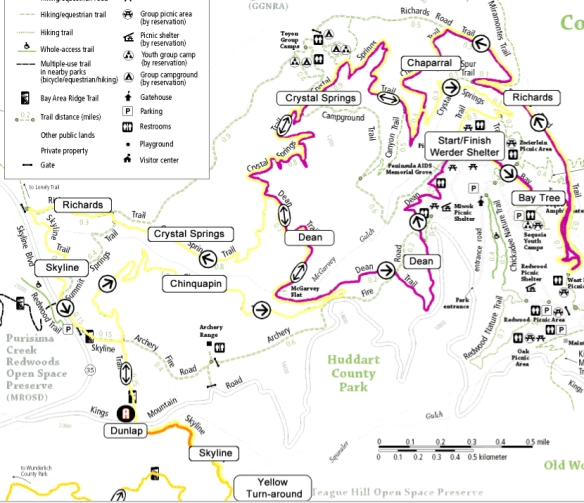 Warning: big climb up ahead!

Pre-race (Race Day):
Our races didn’t start until 9 and 9:15 (the Gypsy Runner was running the 10K), which allowed for a relatively relaxing race day morning — yay for winter races!  As an experiment, I decided to eat a little more than usual.  (Still not sure how that went; I’ll need to do more tests.)  We arrived at Huddart Park at 8:30 a.m. as planned, but unfortunately, so did everyone else.  Luckily, the line to pay the park entrance fee went rather quickly, and before I knew it, I had parked, used the restroom, gotten my bib, chatted with the Gypsy Runner and Cathryn (who was running the 10K; see her recap here), and walked to the starting corral.  It was a bit difficult to hear the instructions, but luckily I didn’t miss anything important.  I decided to eat a last-minute pre-race Clif Blok, and then we were off!

Caught mid-chew at the start. (Photo courtesy of Cathryn)

The Race:
The first short section of the course was single track and very crowded.  I knew we’d eventually hit wider trails, so I tried to remain calm and not let the crowd get to me.  As for scenery, most of the course was very similar — beautiful redwood forest with soft, pine needle covered trails; i.e., my definition of perfect trail running.  Even the grade was perfect for both uphill and downhill.  There was only one hill where I saw everyone walking — otherwise, everything was runnable, as long as you were fit enough.  Alas, I was *not* fit enough and had to alternate between running and walking in very short intervals. 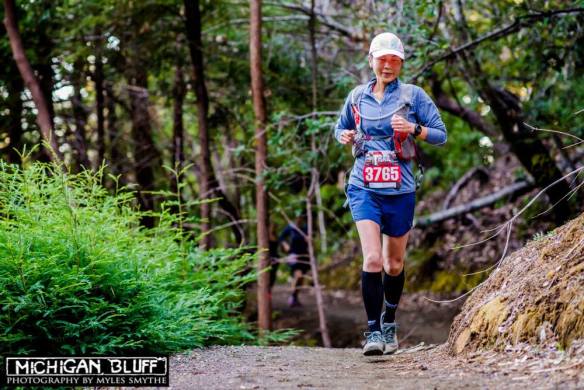 At the beginning of the uphill section, and being a little camera-shy for some reason.  (BTW these FREE photos, courtesy of Michigan Bluff Photography, are amazing!)

The Gypsy Runner, movin’ right along

I was climbing, very slowly but surely, up to Skyline Trail.  Around mile 4, the lead 10K runners were starting to pass me. This meant that I got to see and run with the Gypsy Runner briefly, which was exciting.  Also right around that time, I remember feeling tired and noticing that the Clif Bloks weren’t agreeing with my stomach.  I started to get down on myself about being so slow during this climb, but then I caught myself before I fell into the dreaded shame spiral.  I remembered that my main goal was to have fun and enjoy this race, so I stopped concentrating on the negative and focused on the beauty around me and for being able to participate in this race.

A couple of miles later, I was really happy to finally reach the aid station — the Tailwind electrolyte drink tasted so refreshing! There was a short out-and-back section past the aid station to the turn around, and I stopped for another hit of Tailwind on my way back.  I also spent 2-3 minutes re-tying my shoes with my not-very-agile cold fingers — my shoes were really loose and I prefer to run downhill with tightly bound shoes.  To me, it was time well-spent.

I was in a pretty good mood after the turn around, knowing that I was more than halfway done and had a lot of downhill miles ahead of me.  It also helped that the downhill sections were so fun.  I felt like I was flying!  I was also aware however, that I still had quite a few miles ahead of me.  And for the first time in a long time, it was actually muscle fatigue that kept me from running up the small hilly sections, not my lungs or my heart.  During this section, I was running near 2 women who were happily chatting away.  At first I wanted to run away from their conversation, but I eventually found solace in it and enjoyed having them around. 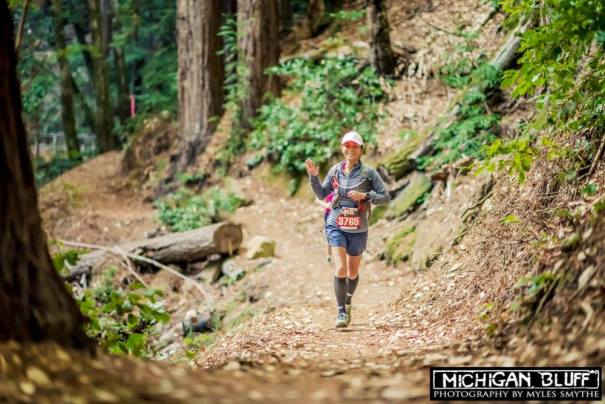 I kept leap-frogging with the 2 women for over 4 miles, but they passed me for the final time as we went up a small hill, at what I thought was mile 11.5.  I saw them crest the hill, and then they took off with some zeal.  Unbeknownst to me, the finish was less than half a mile away!  My Garmin must have gotten confused by all of the switchbacks (I’ve omitted my Garmin splits for this very reason), so I hadn’t expected the finish to be so close.  I saw the parking lot and began to hoof it.  As I entered the field, I saw the Gypsy Runner cheering me on and the finish corral in the distance. I tried my best to kick to the end and crossed the finish line in 2:39:44, way off my “A” goal, but still more than 9 minutes faster than LCTC.

Post-race:
After catching my breath and reuniting with the Gypsy Runner, I ate a few slices of watermelon, my favorite post-run snack.  I found out that the Gypsy Runner came in at 55:19, good for 11th overall and 4th in his age group (so close!).  For not having run in over a month, I think he did awesome.  We shared a soda and even though I had no appetite, I grabbed a some snacks for the road.  I picked up my shirt and coffee mug (in lieu of a medal, which is cool and useful, actually!) and we headed home.  Marathons notwithstanding, it was the first time in a long time that I remember feeling so incredibly exhausted.  My muscles ached all over, but in a good way that was pleasing to me — in a way, it signified the hard work they had done that day.  It was a happy birthday indeed.