Everything in Moderation (Kaiser Week 2)

Well, it seems that I got a little too excited about training and bit off more than I could chew this week. (I blame Mick Jagger and his sweet dance moves.)  Let’s just say intense running + Christmas overindulgence = BAD idea.  Read on to see what I mean…

Mon: Yoga.
I was so excited about returning to an actual studio, but this class was a big let down.  It was too gentle and full of stretches that I already do on my own.  Luckily, I have a 30-day unlimited pass so it wasn’t a waste of money.

Fri: Yoga.
Much, much better than Monday’s class.  It was a great workout… perhaps too much of a workout before a long trail run on Saturday morning?  At one point, the instructor noted so many problems with one of my poses that I just had to laugh.  I’m clearly very rusty, but also happy to be back at it. 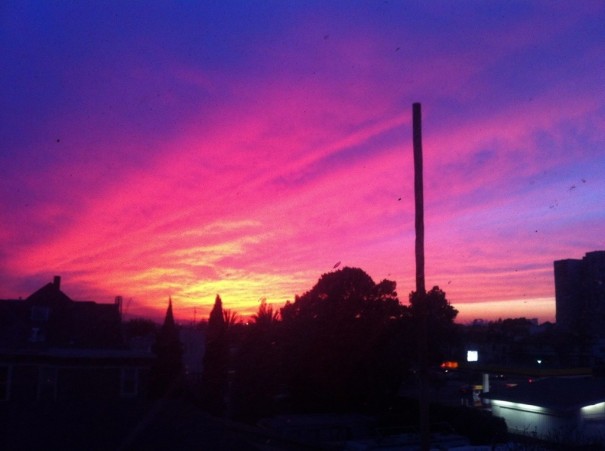 There was a really spectacular sunset on Friday.

Sat: Trail run with Cathryn!
For installment #4 of our trail exploration series, I invited Cathryn over to the East Bay to run the Briones Reservoir.  Bear Creek Trail at Briones is one of my favorite East Bay trails, so I was excited to explore the rest of the reservoir with Cathryn.  However, for all of my enthusiasm, there were a few problems.  First, I completely underestimated this run.  Looking at the elevation profile I found online, I thought we’d encounter 2 big hills with flat in between instead of the numerous steep rollers throughout.  As a result, I didn’t bring enough fuel, especially considering how tired I was.  Fortunately, Cathryn gave me her spare gel, which enabled me to power through (probably more mentally than physically, but who knows).  Second, I was unusually worn out and my stomach was quite disagreeable.  I think the combination of Friday night yoga, 2 speedy-ish workouts Tues + Thurs, plus holiday gluttony contributed to my feeling of being totally wrecked.  Third, poor Cathryn caught her foot on the trail (ironically, the paved, crumbling part) and re-injured her bad ankle.  She gutted it out through 9 more miles — hopefully she won’t be suffering any serious damage from that.  Despite all of our problems, it was a beautiful day and I really can’t complain about ending 2013 with such a gorgeous trail run/hike (thanks for the reminder, Cathryn!).

Peeking through the trees for a glimpse of Briones Reservoir (photo credit: Cathryn)

Through the rolling hills we go… (photo courtesy of Cathryn)

Smiling because we’re less than a mile from the finish (I was really suffering) photo credit: Cathryn

Total mileage for the week: 25.4
After yesterday’s trail run, I continued to feel pretty weak.  I took a 1.5 hour nap in the afternoon and then slept 11 hours last night!  Also, my left hip began to act up this week, which isn’t surprising since it usually does after some speedwork.  I’ll have to be careful and keep my eye on that… if rest, stretching, and rolling doesn’t do the trick, I may end up making an appointment for an ART session.  So, the lesson for this week is: everything in moderation.  Time for less indulgence and more mellow workouts.

12 comments on “Everything in Moderation (Kaiser Week 2)”