Home › Training › Base Building, Training Plan, and Fundraising for the Big Basin 50K!

Base Building, Training Plan, and Fundraising for the Big Basin 50K!

Posted on March 5, 2015 by Jen — 20 Comments
As I mentioned earlier this year, my big goal for 2015 is to run my first ultramarathon: the Big Basin 50K.  Even though the race seems far, far away, I’m starting my official 16-week training plan in early April – in just 4 weeks!  This post is basically me rambling about my recent training and how it fits in with the big picture, and what my training for Big Basin will look like.  It will probably be very boring — don’t say I didn’t warn you!

My plan, which I’ll get to in a second, isn’t super-duper mileage heavy as far as 50K training plans go.  The weekly mileage ranges from 33 to 51 miles, and my longest run will be a trail marathon in June.  So, it’s not that much more intense than the training I did for Marine Corps Marathon…which I’ve been told is pretty much about right (i.e., that 50K training basically the same as marathon training with longer long runs).

However, I’ve been lagging behind on base building.  My original goal was to hit 25 miles per week (mpw) for January, then build to 30 mpw in February, and get to 35 mpw in March — keeping my runs slow and aerobic.  Despite my best intentions, my weekly mileage kept stalling out in the low 20’s for most of January and February.  The one positive development is that, since switching to afternoon runs in Berkeley, where hills are unavoidable, my fitness seems to be improving rapidly.  For instance, after 2 weeks of running in Berkeley, I ran my usual neighborhood loop with an average pace 30 seconds per mile faster at the same heart rate!  So, the hills have been a great, though tiring, stimulus. 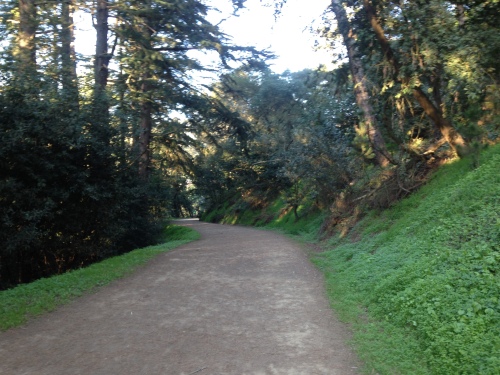 One of the trails I’ve been running on. Almost 1000 feet of climbing in 3 miles – a great workout!

To increase my weekly mileage, I finally decided to write actual numbers down on a calendar so that I would have a concrete goal in mind.  It worked: last week, I finally got over the 25 mpw hump by hitting 26.6 miles!  It was an especially intense week physically, as I also got a stand up desk at work AND had to put some big pieces of furniture together (computer benches don’t build themselves, you know).  By Saturday morning, the day of my planned long run, I was exhausted despite getting 9 hours of sleep.  As I grumbled about how tired I was, the Gypsy Runner talked some sense into me and questioned why I had to do my long run that day.  Wouldn’t it be better to rest?  I heeded his advice… sort of.  I decided to do a gym workout — 30 minutes bike, 3 miles on the treadmill, and some strengthening exercises — instead of a long trail run, which I would do on Sunday.  It ended up being the wisest decision, since I probably wouldn’t have done the gym workout on Sunday after a tiring run on Saturday.  By the time I hit the trails late Sunday morning, I felt refreshed and happy. 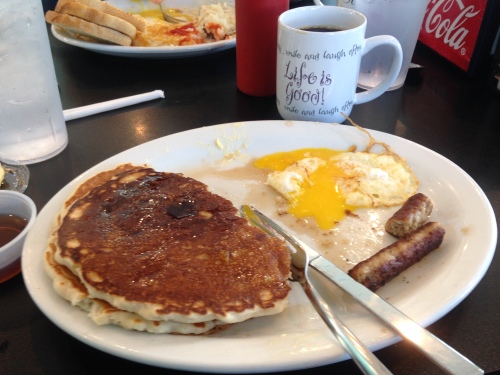 Instead of a long run, I decided to eat a huge breakfast. Best decision ever.

This week will also be a struggle (same story, different week) because the GR and I are going to Tahoe with my new colleagues. (Can I still say “new” even if I’ve been working here for 5 months now?)  I’m not sure I’ll get a run in on Saturday, but we should be back early enough on Sunday for me to go on a decent trail run (i.e., ~10 miles).  Since I’m not sure about my weekend mileage, I’ve been trying to pile up the weekday miles, adding a run on Wednesday morning to my usual Tuesday/Thursday runs.  I figure I better start getting used to running 5 days a week sooner rather than later, since that’s what my training plan calls for.

My plan for the rest of the base building goes something like this:

I’m also participating in a friend’s 30-day plank challenge.  We’re currently only at 40 seconds, but on day 30, we’re supposed to do a 5-minute plank!! Egads.  Part of the reason I agreed to do it is because I’ve been TERRIBLE about committing to any kind of core workout.  I thought this might get me on the right path at the very least, even if I don’t nail a 5-minute plank at the end. 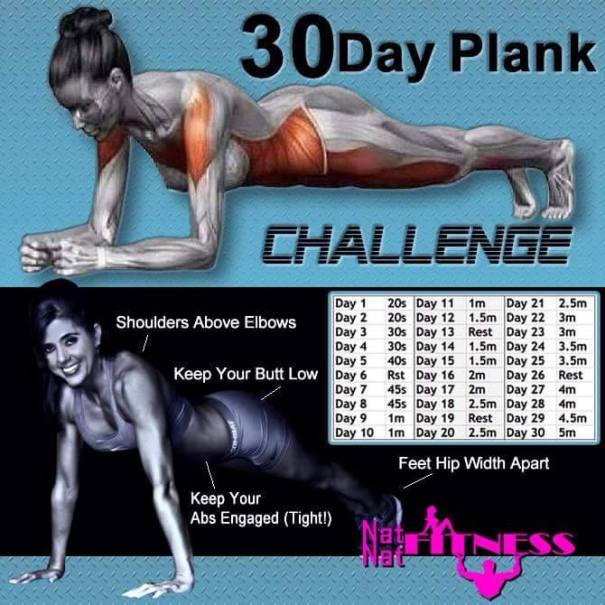 Moving on to the training plan!  How did I come up with this plan?  (How did I get in this nutshell?)  Two main sources: Google and Hal Koerner’s Ultramarathon Guide.  The most useful training plan I found online was EB’s plan for her first 50K.  I think a good training plan should look doable, but also scare you a little bit, and that’s how I felt when I looked at EB’s plan.  Hal Koerner’s plan scared me A LOT, but also emphasized the importance of balancing weekday to weekend mileage.  So I plotted the plans on to spreadsheets (as you do) and then combined them to look at the different variations.  This is what I ended up with: 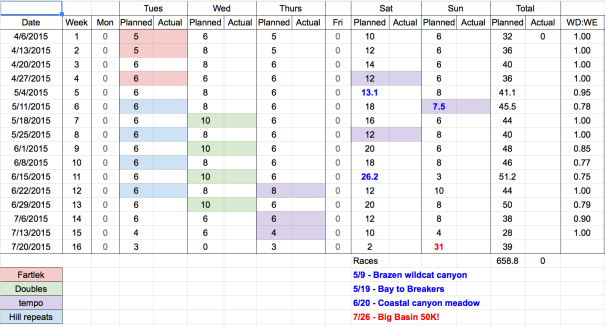 The keys to this plan are:

The biggest challenges that I can already see:

If anyone – especially 50K veterans – has any suggestions or advice, please let me know!

And last but certainly not least… if you follow me on social media, you’ll know that I’m using the Big Basin 50K as a platform to raise money for Running for a Better Oakland.  The whole story is spelled out on my fundraising page, but the TL;DR version is that it’s a great charity and I’m excited to be fundraising for them.  24 hours after I sent out the initial emails, I’ve already received $361 out of my $1000 goal.  At this rate, I might have to increase my goal!  I’ve been blown away and very touched by people’s generosity.  Hopefully, the fundraising will serve as a well of motivation when things get tough: Do it for the kids of RBO! 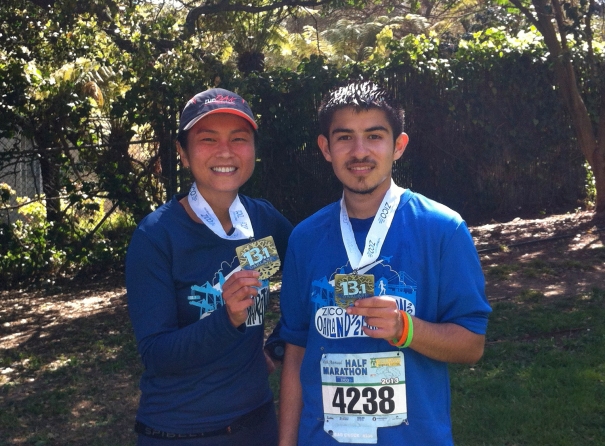 Me and my RBO mentee Alejandro in 2013, showing off our Oakland Half bling!

20 comments on “Base Building, Training Plan, and Fundraising for the Big Basin 50K!”