How is it race week already?! Time is zooming by! Last time I checked in, I was about to leave for an 11-day trip to Taiwan. I’m happy to report that I managed to hit my running goals: I ran 4 times, for a total of ~29 miles. I also ran around the small island where my parents live – a 19.5 km circuit – something I’ve wanted to do for years. Best of all, I was able to explore the route with my dad – me on foot, him on his bike. Despite biking the path for many years, he had never done the whole loop and was excited to explore with me. While it was fun, we both agreed that the previously unexplored section was quite unimpressive: the path was right next to heavy traffic and broken up by 2 major intersections. With our curiosity satiated, we decided never to do the loop ever again. 🙂 My favorite part was the elevated section with views of the Tamshui River and Yanmingshan (tallest mountain in Taipei). 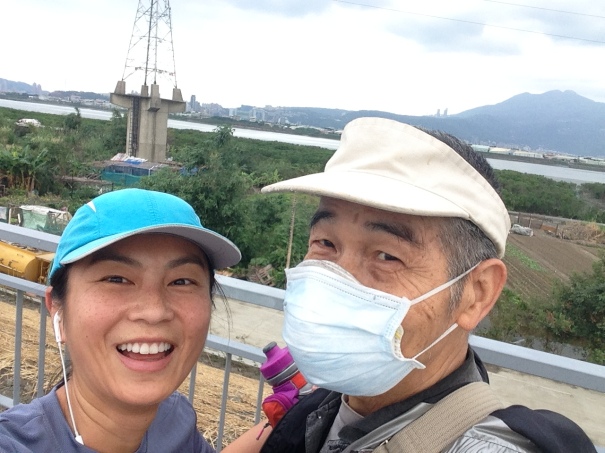 Selfie with my dad – who was wearing a facemask due to air quality concerns.

Panoramic from the riverside path.

When I got back, I wrestled a bit with jet lag and running motivation. (I swear that jet lag is getting exponentially worse with every trip. Getting older sucks sometimes!) Plus, the weather and short days didn’t help! I came back to a cold spell in the Bay Area, with lows in the 40’s. Quite a shock coming from Taipei, where it was still t-shirt weather. I managed to get one weekday run in on Tuesday morning, before work and rain interfered with my running plans on Thursday.

Saturday, I joined some friends (old and new) at Redwood Regional. It’s always fun to see familiar trails through fresh eyes, and it was definitely nice to get out and run on some dirt for the first time in weeks. After the run, we refueled with brunch (of course). It was a great morning. (As usual, Cathryn has a better write-up with more photos here.)

The trail crew from Saturday. We’re aglow with endorphins!

Unfortunately, I woke up Sunday with a sore left foot. I dismissed it as just normal aches and pains, but by the afternoon it had gotten painful enough that I was walking around Target with a limp. I went home and iced it, but that didn’t seem to help. I’m still confused about what caused it. My best guess is that I haven’t done any hills at all in many weeks, and I overdid things on Saturday? I don’t think it was mileage, because we ran 8.5 miles, which I felt comfortable with.

I hoped to wake up Monday without foot pain, but unfortunately the same story repeated itself: some soreness in the morning, followed by limp-inducing pain by the end of the day. I told myself if it didn’t get better, then I’d go to the doctor. Thinking that it might have been related to my other left leg issues, I decided to roll and stretch both legs. There were definitely some tight spots – whether they were related to the foot issue, I’m not sure, but I’m glad I spent some time working out those knots.

I skipped my usual Tuesday morning run in favor of another rest day. My foot wasn’t 100%, but it felt much better than the day before. I’d say today (Wednesday) is even better still, though I’m still apprehensive about running just yet.

So, this doesn’t bode well for the Walnut Creek Half Marathon on Saturday. Returning from Taiwan, I felt that my endurance was coming back, but since I hadn’t worked much on speed, I didn’t think a PR was in the cards. And now, with this foot set-back, I’m just hoping to be able to start and finish the race Saturday injury-free. I’m not planning on wearing a watch at all and just run by feel. We’ll see how it goes!