Training-wise, this past week was pretty lackluster. I had a serious bout of (allergy induced?) sinus pain on Monday and Tuesday, which meant no workout on Tuesday. In its place, I did some easy laps at a nearby park, walk/jogging to sweat out the bad stuff.

By Thursday, I was feeling a bit better, so I attempted a long interval workout: 2 miles at 10K effort, 4 minute recovery, then another mile at 10K effort. I’m working my way up to 2 x 2 mile repeats at race pace, but I wanted to take it easier since I hadn’t been feeling well. I think race effort was the right call, because despite running at an effort level harder than last week’s tempo, I ended up running the same pace (8:30/mile). That was disappointing, but clearly, my body wasn’t feeling 100% and still getting over whatever had affected me earlier in the week.

Saturday morning, I woke up feeling extremely unmotivated. It was raining out, and I was very lethargic and also HUNGRY. My #1 mistake? Eating only two tiny taco truck tacos for dinner on Friday night. I read recently that the number one training mistake to avoid, in terms of nutrition, is to never go bed hungry. After this weekend, I agree! Although I ate breakfast, I was still starving, which didn’t help motivate me to get out the door. I eventually got to the treadmill and did the workout I meant to do on Tuesday: 8 x 400 m with 90 second recovery intervals. For entertainment, I watched a junky reality TV show on my phone while the lady next to me on the Stairmaster decided to belt out random “OH”s and “Uh-Huh!”s, and the random swear word, as she sung along with whatever was on her playlist. It was one of the strangest experiences I’ve ever had on the treadmill. She was singing so loudly that I’m pretty sure the whole gym could hear her. On one hand, I was like, “You go, girl!” On the other, I found her behavior rude and annoying. But the time passed quickly enough.

I think I was hungry all day Saturday, even though I ended up eating 2 lunches. It’s Monday and I’m still hungry, though I think that has to do with not eating enough yesterday either. Grr. Anyway! On the bright side, Sunday’s long run was pretty nice. I ran for 2 hours along the shoreline, where I was fortunate to avoid the rain, though there was a decent headwind on the back end of the run. The wildflowers are blooming now and it’s so pretty. 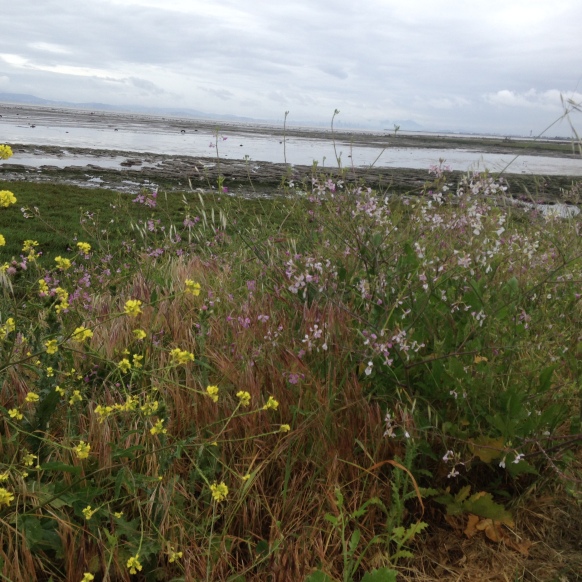 Just a small clump of wildflowers at the shoreline.

The only downside of the run came afterward, when I drove by my favorite donut shop and it was already closed. Whomp whomp. I had been looking forward to a special post-run treat for the whole second half of my run, so I was pretty disappointed. The shop’s hours are technically 4:00 a.m. to 12:00 p.m. and it was only 11:30, but they close early  when they run out of donuts. I’ll have to consider this the next time I get a late start on my long run…

Finally, I have to make a confession: I ate fast food not just once, but twice, this week. The first time was Tuesday, when I had stayed home from work due to the sinus pain. McDonald’s chicken McNuggets with sweet ‘n’ sour sauce are my kryptonite, and I’ve managed to avoid eating them for years… until Tuesday. I broke down and decided that I wanted to treat myself, so I asked the Gypsy Runner to pick up a chicken McNugget value meal. Was it worth it? Totally. The second instance was on Sunday, post-donut debacle, when I found myself starving and needing calories. In desperation, I drove to Wendy’s and got a spicy chicken sandwich meal, which was definitely not good and not worth it.

Luckily, today is the start of new week and hopefully a diet and training do-over. Wish me luck!