Here are all of the little details that might be useful to those interested in running CIM. If you’re interested in my race recap, you can find it here.

Cost: The day after the marathon, they do a “re-run” special of $89 for the first 500 registrants. This year, it sold out so quickly that they added a second tier of $99 registration for the next 500 registrants. The price ramps up to $150 by mid summer.

Sell-out factor: Varies year to year. Sometimes the race sells out by September, but other times, you can still register in late November. I don’t know if or when the race sold out this year.

Course: Point-to-point course from Folsom to Sacramento. Wide roads with few turns makes it relatively easy to run tangents. There are rolling hills for the first 22 miles, with a net descent of ~350 feet.

Race day transportation: If you stay near the finish line, there are 4 different locations to jump on the 5:00 a.m. shuttle to Folsom. The ride took us about 40 minutes. If you stay near Folsom, there are also shuttles to drop you off at the start and there’s a VIP tent for people staying in specific Folsom hotels. If you’re super lucky and have someone nice enough to drop you off in the morning, there are several drop off locations about a mile from the start where they run shuttles back and forth (I think). I’ve run CIM twice, and regardless of where you’re staying, allow plenty of time to get to the start due to traffic congestion or shuttles getting lost. It’s not worth the extra 15-30 minutes of sleep to run the risk of getting to the start late!

Hotels/accomodations: There are a list of official race hotels on the website. KH and I ended up at The Inn Off Capitol Park, which was $124/night pre-tax, not including the $10 parking fee. It was very conveniently located to the Expo, shuttle pickup, and finish line. Our room, which had a queen sized bed and a pull-out couch, was clean and quiet. (I had requested a top floor corner room for that very reason.) There was a 4:00 a.m. free breakfast that we didn’t partake in. The best part was that they allowed marathon runners a special late checkout for free. The normal check-out time was 11:00 a.m. and at first, they said they’d let us check out at noon. Later on, they told us they were extending late checkout to 2:00 p.m.! That was super helpful, especially since I finished significantly later than expected. We didn’t get back to our hotel room until almost noon. Cathryn and her family stayed at the youth hostel, which they spoke of highly.

Start line area: When we arrived at the start, a volunteer got on the bus and gave us a lay of the land: drop bag trucks straight ahead, start corral to the left, and bathrooms to the right. Since I got to the start line so late in 2012, I was amazed at how crowded it was. The notorious line of porta potties (CIM boasts that it has the best porta potty to runner ratio) was long, but so were the numbers of people waiting at each set of ~5. We dropped off our drop bags just in time to beat the rush (around 20 minutes before the race). In the start corral, there are pace group signs in the median as well as pacers holding signs. Runners can line up on either side of the road to relieve congestion.

Aid stations: The first 2-3 are spaced farther apart (every 2-3 miles), then as the race goes on, the frequency of aid stations increases. All had Nuun (ick) or water (also tasted gross and chemically). 4 of the aid stations were handing out Gu, and I definitely remember a couple had fresh fruit (bananas and orange slices). Every aid station had a medical tent.

Spectators: Just as I had remembered from 2012, the spectators at CIM are *awesome*. Yes, there are patches of people who are just looking out for their runner, but many were there to cheer on all of us. Our bibs also had our names on them, so a few times, spectators or volunteers cheered me on by name, which was really nice. I was especially touched by the community support. There was one neighborhood block where people had firepits and chairs set up at the end of their driveways, as if they were tailgating, and clapping and cheering for us. For tips on spectating at CIM, I recommend you read Cathryn’s spectating recap.

On-course entertainment: The three relay exchanges were very loud and had lots of spectators and music. There were a few bands and DJs out on the course too.

Swag: Gender-specific, attractive long sleeve shirt and medal with matching logos of the the Sacramento skyline (which I could not point out except for the Capitol). 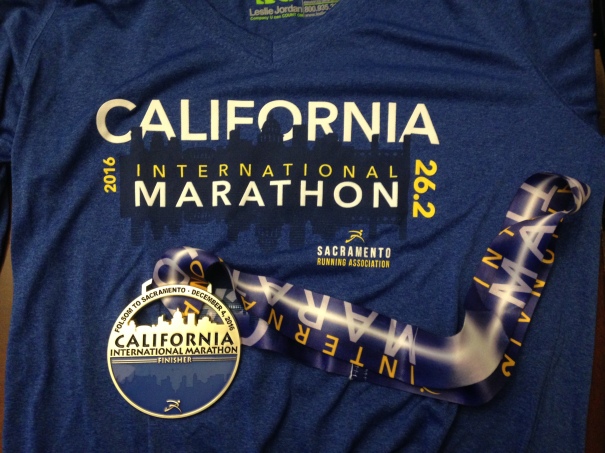 Post-race food/drink: In the finisher’s chute, they gave us heat sheets, banana, Kind bars, and Pop chips. There was hot food also but I didn’t partake (I saw they had oatmeal), and also a beer area sponsored by Erdinger.

Bag drop: We were given clear plastic bags at the expo to use as our drop bags. The drop off situation at the start was OK – there were only 2 trucks, but they were unlabeled, so it wasn’t until you got close to dropping off your bag to the volunteers that they’d say, “[bib number] 4000 and up – other truck!”. Then you’d have to cut over to the other line and get a volunteer’s attention to grab your bag. After the race, all of the bags were organized by number on a large lawn secured behind a chain-linked fence. After waiting in one area, hoping to get the one kid’s attention, I hobbled around to where my bag was and found a few volunteers helping people there. I got my bag immediately.

Pros: This is a super well-organized marathon, clearly prioritizing the runner experience first and foremost. The course can be fast (you still need to train for hills), especially when the weather cooperates. I really like the size of the field (not too big, not too small) and as I said above, the spectators can’t be beat – though I’ve yet to run Boston and NYCM.

Cons: The point-to-point course increases chances of logistical difficulties with shuttles. The other risk you take with CIM is the weather. 2012 was the Year of the Monsoon and 2013 had below freezing temps. I also take issue with the “Fastest course in the west” claim. I think it definitely could be fast, but it does present its own challenges.

Take-home message: CIM was my first marathon and after running it again this year, it’s clear that it will always be one of my favorites. Well-organized and well-supported. I have a feeling that I’ll be back someday.