Every blogger follows his/her own rules when it comes to how much to divulge about their personal lives online. I’ve tried my best to keep my professional life under the covers mostly because: (1) this is a running blog, and I’m not a professional runner (in case you haven’t noticed); and (2) even though it’s quite easy to find my full name through race results and whatnot, my name is still fairly common so it’s hard to stalk me. However, by revealing more about where I work and what I do, it would be pretty easy to find me. And that freaks me out a little.

Another thing I’ve shied away from is discussing politics on this blog, mostly because I don’t feel like I have too much original content to contribute. All I’d end up doing is posting GIFS, links to SNL skits, and retweets.

This is how I’ve felt for as long as I’ve been blogging (a total of ~10 years over 3 blogs), and ordinarily, I’d keep on keeping on. But these aren’t ordinary times. So, if you normally come here for running content, please excuse the brief detour into my work life — and also a slightly political sidenote.

Most of you know that I’m a scientist. I have a B.S. in zoology (with a focus on cell and molecular biology) and a Ph.D. in biology. After getting my doctorate, I went on to do postdoctoral research at UC Berkeley. I spent 11.5 years of my life researching the development of embryos, using what we biologists call “model organisms” – animals that can be easily raised in the lab. I was fascinated by the basic question of embryology: how does one fertilized cell become a multicellular organism? I eventually focused on a more specific question, which is how do embryos get their shape? How do we go from a ball of cells to a baby with a head, a gut, hands, and feet? From a biomedical standpoint, this kind of research can reveal potential mechanisms behind normal developmental events and also in abnormal growth and development, such as cancer.

After my postdoc, I took a short detour to work in legal consulting (accident reconstruction), but then came back to UC Berkeley to work as a staff scientist. The point of all of this is to tell you that I’m an #actuallivingscientist. This hashtag grew out of discussions from the March for Science movement discussing how we, as scientists, can do better in terms of science communication. One of the barriers to overcome is to make science more accessible to lay people. Another is to make ourselves more visible. Hence, the #actuallivingscientist hashtag. I posted this tweet a couple of weeks ago: 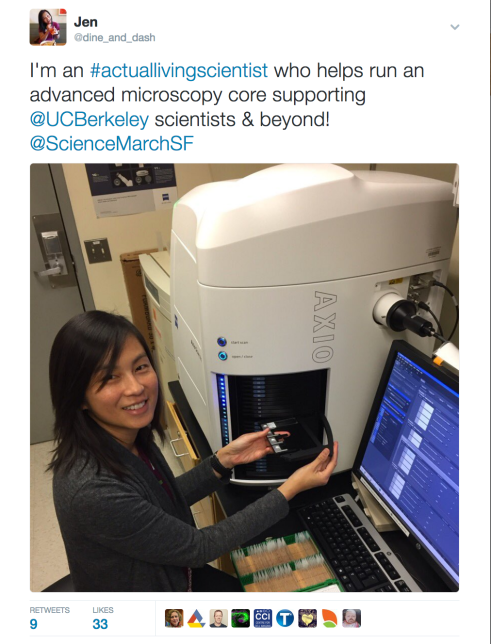 I was uneasy about mixing business with pleasure, but I realized that it’s time to step up and speak out about science. There’s data from a 2009 study that reports 83% of Americans can’t name a single living scientist! Sadly, I doubt scientific knowledge has improved much since then. Maybe it’s naive of me, but I hope that even if one person reads this post and feels like they now know a scientist, that would perhaps help the cause of science communication, even just a little.

The main reason I’ve decided to be more outspoken and visible as a scientist? Well, even though I don’t believe science should be political, it unfortunately has become that way. Issues like climate change shouldn’t be a partisan issue, but they are. By coming forward and explaining our passions as scientists, I hope we can bridge the divide between researchers and the public. The goal is to work toward solutions based on hard facts and real data, not anecdotal feelings or lobbyist-funded policy.

The March for Science folks have been working hard to come up with core goals for a more unified march. These include:

I really hope you will consider joining the march on April 22nd. The main march will be in Washington DC, but here’s where you can find a list of cities hosting marches. You don’t have to be a scientist to march! If you stand for the core principles stated above, then come march with us.

OK, this is the end of my rant. Thanks for reading!