Editors note: I wrote most of this recap over 2 weeks ago and have been dragging my feet about finishing it. I’m throwing my perfectionist tendencies aside and just posting as it is, for the most part. Enjoy!
**

Confession: despite having quite a bit of downtime recently to blog about Dirty Dozen, I’ve had zero desire to do so. I started a recap the week after the race, but it was so boring that I almost fell asleep rereading it. (Slight exaggeration, but it really wasn’t very good.) I think I needed the last two weeks to really digest what happened on race day and how I felt about my performance and about endurance racing in general. But I’m getting ahead of myself; let’s rewind to Friday, the day before the race.

Friday (1 day before the race)

(You can read about the race details and my preview/thoughts here.)

I debated whether to take Friday off from work, since I wanted to feel fresh for Saturday. However, since I usually work from home on Fridays, I decided against using a day of PTO for no reason. It ended up being a bit more stressful and busy than I expected, but still, not too bad. I ate a huge lunch of dim sum and treated myself to a boba green tea, which would later come to haunt me. (But yay for carb loading!)

I wasn’t even hungry for dinner, but I picked up Hawaiian chicken BBQ, which has worked really well for me as a pre-long run meal. I ate what I could and then picked up KP from the airport. I was so excited that she came up for this race! We chatted for a while before deciding it was time to go to bed, around 9:30pm. We had an early wakeup call, with plans to leave the house by 5:00 a.m.!

I’m not sure if it was pre-race anxiety, the extra dose of sugar and caffeine at lunch, the excitement of having a friend visit, and/or the early wakeup call, but I was NOT sleepy. I tried my best to relax into my pre-bed routine – I’m usually a CHAMP at falling asleep in minutes, but I continued to toss and turn for hours. Altogether, I probably slept just over 3 hours, and that’s on top of not sleeping well Thursday night either. Boo hoo. I really hoped that racing conventional wisdom would be right – that it doesn’t matter how well you sleep the night before the race, but the few nights before that.

Everything pre-race went relatively smoothly. There was a small hiccup when the Safeway that I thought would be open at 5:00 a.m. didn’t actually open until 6:00. Luckily, there was a 7-Eleven down the road, where I picked up ice for the cooler. We got to Point Pinole shortly after the gates opened at 6:00 a.m., parked, and got a good spot in “Tent Alley.” By way of explanation, Tent Alley is the area on either side of orange cones for the 50 yards or so after the finish arch/loop marker. It’s where runners set up their personal aid stations and extra gear. Some groups go all out and set up big tents or canopies and have fully stocked aid stations, whereas KP and I set down a blanket, a chair, a cooler, and our gear. We were lucky to get a spot right by the orange cones. I didn’t want to spend any extra energy or time wandering off course to get fuel or to grab ice. 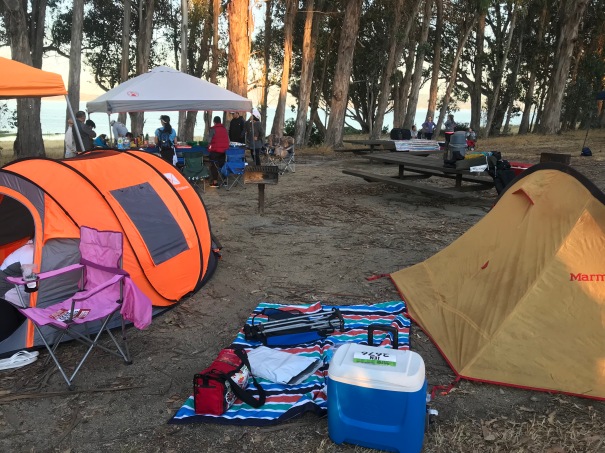 Our “camp” (the striped blanket) 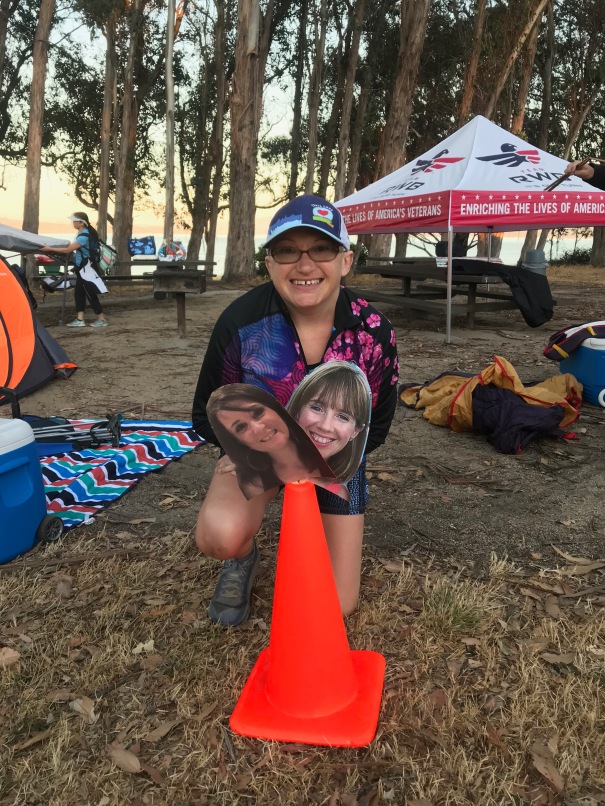 It’s flat Cat and flat Jess cheering us on!

Despite being very tired, race day adrenaline rushed through my system. The morning was cool (maybe in the mid-50s?), but the skies were clear, meaning we wouldn’t be graced with summer fog. The forecast called for highs to be in the mid-70s and there would be a mix of shade and sun on the course. Conditions definitely could have been worse! We found DD and AS in the starting corral and took a quick selfie while we were all still feeling fresh and energetic. 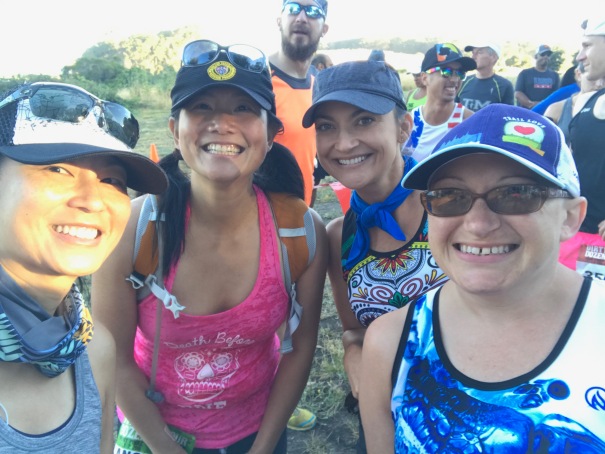 In the days before the race, I struggled with race strategy. Should I go slow and steady, or start a tiny bit faster to bank time before the sun came out? It’s impossible to know which one would’ve been most effective, but I ended up doing the latter. KP, DD, AS, and I fell into an easy rhythm and I figured that as long as we kept the pace conversational, things would be fine. Yes, I was running faster than my goal pace (11:30/mile), but I felt good. I made sure my breathing was easy and my heart rate low. On that first loop, I was relieved to see how nice the loop was. I’ve run at Point Pinole before, but I had forgotten the changing vistas and landscape. It’s a good thing too, because I was planning on running this “big loop” (3.37 miles) a total of 8 times before switching to the small loop. At the end of the first loop, I treated myself to a salted caramel Gu. 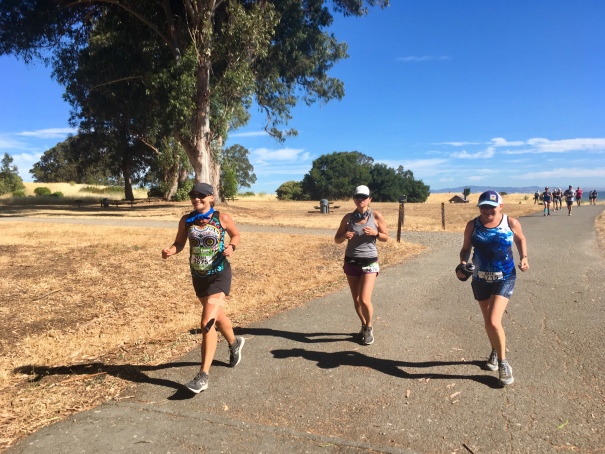 I was still running with our little foursome, occasionally slowing down on purpose whenever I felt us drifting towards 10:00-10:30/mile. It felt like it was getting warmer, but I still felt pretty good. I grabbed a slice of watermelon at the aid station (2 miles in), and I looked forward the cold Gatorade in my personal cooler at the end of the loop. 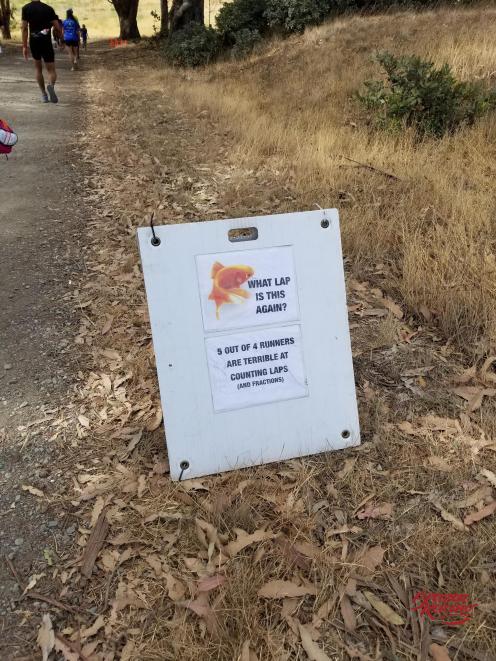 Funny signs like this along the course kept runners’ spirits up

I was still feeling pretty good, but I started thinking about my end-of-lap treat a little earlier than usual. Nothing really eventful happened here, except noting that I seemed to feeling pretty tired for being only 10 miles in. At least I was ~5 minutes ahead of 50K pace. I grabbed another Gu at the end of this lap. 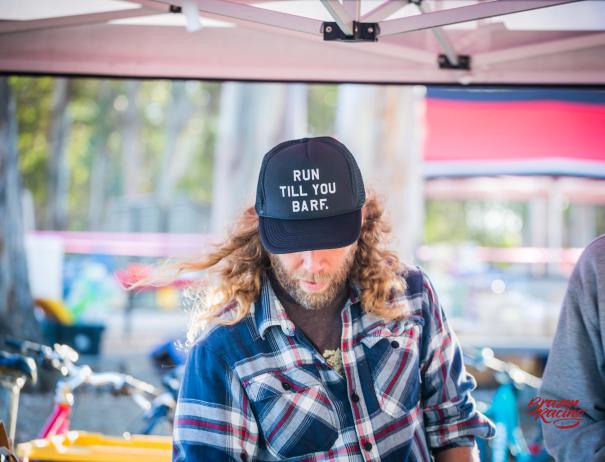 I started breathing harder during this lap, which is something that has happened to me before. The heavy breathing coincides with a high heart rate, and I just can’t seem to bring it back down, no matter how many walk breaks I take. I think it’s definitely a psychosomatic thing. I was mildly successful at trying to prevent total disaster by controlling my breathing. I stopped talking and let DD and AS drive the conversation. 2 miles into the 4th loop, KP took a bathroom break and I never saw her again until the end of the race. I continued to follow DD and AS through to the end of loop 4, where DD went off to her camp to restock, and I stopped at our camp to drink some Coke. I tried to chug the Coke and catch up to AS but I eventually lost her as well. I ended up running solo for the rest of the race. 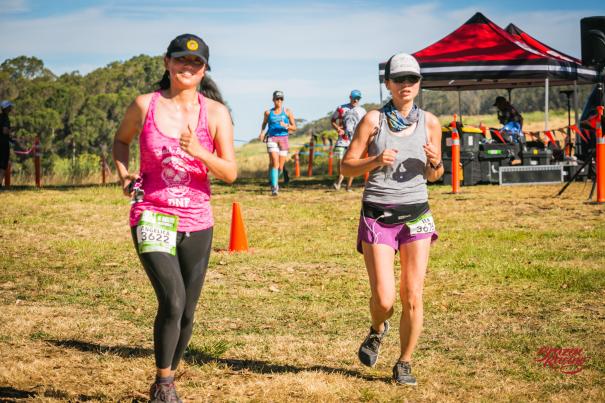 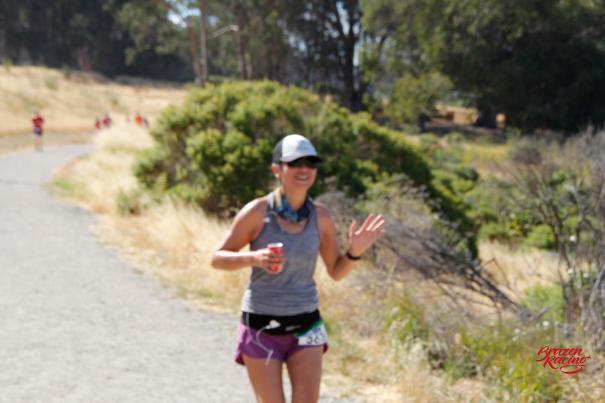 I think I took my first real walk break during Loop 5. To be fair, there were 2 small hills on the big loop where just about everyone walked, but I started taking walk breaks outside of these two hills. I started feeling extremely nauseous as well. I don’t know if it was the lack of sleep, the Coke I just chugged, or the rising temps, but I didn’t feel well. I spent this loop and the next processing and rethinking my strategy. I decided to throw out my outcome-based goals, because I was sure I wasn’t going to run a 50K that day. Instead, I went back to my process-based goals and decided that as long as I kept running to some extent, I would be satisfied. Ecstatic? No. But satisfied.

I decided on run-walk intervals of run for 2 minutes, walk for 30 seconds. It was hard to keep track of the intervals, but that also kept my mind occupied. Eating some salty foods at the aid stations and slowing down eventually got me over my nausea. All of the sweets that I had been eating/drinking was really turning my stomach.

Time is running out! (This was the the race mascot, I think her name was Clocky or something like that.)

Not sure when this was taken… (PC: Brazen Racing)

I had more than an hour to finish this loop. I actually debated whether to wait for the small loop (0.42 miles) to open up, since it seemed easier. However, that meant waiting around for 8 minutes at the start of the small loop – which, despite my slow pace, meant losing about half a mile of distance. So I soldiered on, even calling the Gypsy Runner to chat for 5 minutes. In retrospect, I probably shouldn’t have done that, but at the time, I didn’t care. My main goal at that point was to finish the 8th loop and hopefully have enough time to run a few of the smaller loops. I took my time and started taking longer and longer walk breaks. I was pretty happy to finish this loop, and I celebrated with an extra long break at camp. (Also a mistake, in retrospect.) 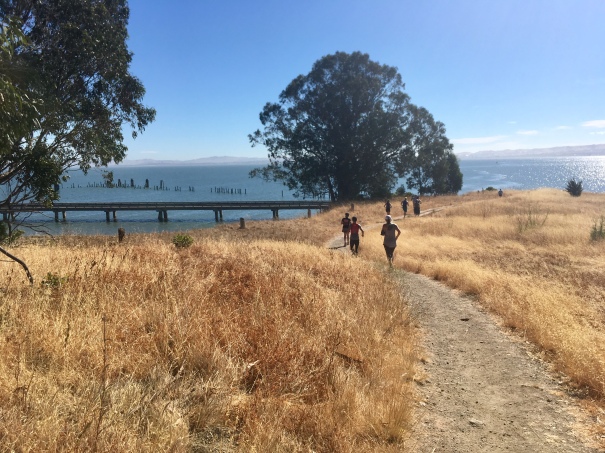 The one section of single-track downhill.

It turned out that these small loops were way easier than the big loops. I wasn’t the only one who found that most of this loop was runnable, minus the last very short uphill portion. If I hadn’t dilly-dallied, I could’ve easily run at least 1 more small loop. Oh well!

I finally saw the rest of my crew at the end of the 3rd loop. We all made the ultra distance, with KP and DD coming in at 27+ miles, and AS running her first 50K! I was a little disappointed with my performance, but overall I was glad to be done. I was also proud of the fact that I kept going, even though I could’ve thrown in the towel at any point. Sure, there were mistakes I made, such as going out too fast, drinking/eating too much sugar to the point of nausea, and taking too long of breaks at aid stations, but I’m putting these things in “lessons learned.” 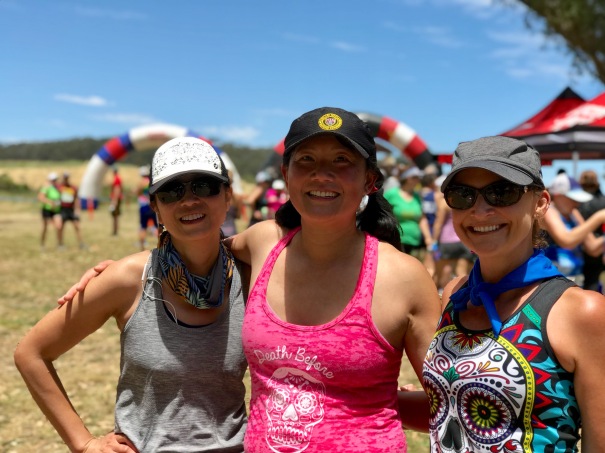 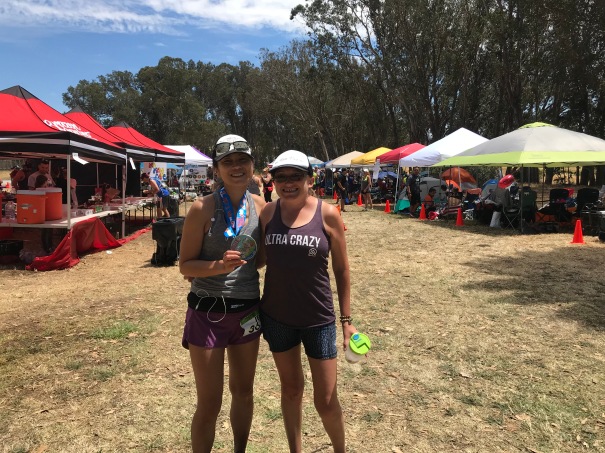 So glad that KP was able to come up to visit!

Will there be a next time? This is my second ultramarathon, and I’m now 0/2 on positive experiences. I’m planning on taking a long break from marathons and ultras. My next 26.2 will be London in April 2019. Until then, I’m looking to focus on running for fun and  fitness. I’ve been enjoying the last couple of relaxing weekends, sleeping in instead of getting up early for long runs. I’m sure at some point, the motivation will be back, but until then, I’m happy to be taking a break from marathon training. 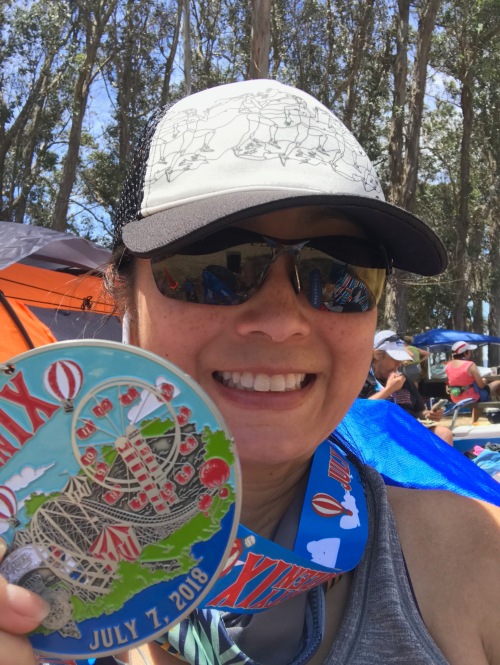 A giant medal (that doubles as a coaster) for a giant feat. 🙂