Since I ran two races this year at the Oakland Running Festival as part of the “We Run The Town Challenge“, I decided to break this recap into 2 parts. This is part 1 recounting the Bank of the West 5K.

As I’ve recently discussed (on numerous occasions), the Bank of the West 5K was my goal race. When I awoke race morning, I found myself quite nervous. Even though I’d done the training, committed to nutrition and recovery, and mentally prepared myself, a part of me worried that I wouldn’t perform well on race day. I kept walking that thin line between confidence in myself and in my training versus being prepared to work hard and push through the pain. My main goal was to try my best no matter what, and even though I didn’t formally declare any outcome based goals, I secretly hoped that my hard work would result in a new PR (sub-25:25).

Things went smoothly pre-race: I woke up at 5:30 a.m., ate breakfast, drank coffee and water, and got dressed. By 6:30, the Gypsy Runner (my #1 supporter) and I were en route to Oakland. Parking was a breeze; we found a spot about half a mile away. We jogged a little towards Snow Park and when we got there, I did a short warm up (jog followed by a few strides).

We found Cathryn and took a pre-race photo. The only snag pre-race was that the GR’s sister and dad, who were also running the 5K, had gotten lost en route. Thankfully, they arrived in time for the start, but we didn’t get to meet up before Cat and I decided to go into the corral.

We lined up near the 8:00/mile sign, surprised to see how few people were ahead of us — maybe only 100 or so, out of the 3000+ runners. I saw a bunch of small children in the front of the crowd and hoped that they were either faster than me or would stay out of my way. With less than a minute before the start, Cat and I wished each other luck and she plugged in her earphones while I tried to remember to breathe. Then the countdown began and we were off!

My Garmin trace of the course, which shows how wonky the GPS is in Downtown Oakland. For one thing, the start and stop should be in the same location. And I swear I didn’t run inside a building while I was on 11th Street!

You can see from the map that: (1) there are a lot of turns in the first mile, and (2) my GPS was wildly inaccurate. Therefore, the splits that I have are also imprecise, so my Garmin data should be taken with a grain of salt.

Mile 1: 8:05
I purposely didn’t want to look at my watch for the first half mile because I knew it probably wouldn’t be accurate and I also didn’t want to be negatively affected by the numbers. I tried to stay relaxed but was keenly aware of all of the turns. The small children that I had noticed before the race were swerving in front of me like bats out of hell, as I had feared, but fortunately, I managed to avoid them. As we entered Frank Ogawa Plaza, we made a bunch of tight turns and funneled through a small alley under construction. It wasn’t too bad where we were, as the field was already spreading out, but apparently the middle and back of the pack runners got stuck at complete stand still. (The organizers later apologized for the congestion.) I kept wondering if I was running too slow (it seemed like it) but I also didn’t want to go out too fast. I eventually gave in and peeked at my watch, which read 8:12 or 8:15. I was annoyed, but also knew that I was gaining speed and didn’t sweat it. I was relieved when my watch beeped right around the 1st mile marker, indicating that I wasn’t running extra distance and/or that my GPS was roughly accurate?

Mile 2: 8:10
We turned left on MLK Jr. Way and hit a nice long stretch of straightaway before having to make a hairpin U-turn. To my surprise, I was still hanging with Cathryn, who was about 5-8 seconds ahead. We gave each other a quick wave at the U-turn. Since Cathryn had finished sub-25 at parkrun in January, I decided I would try to hang with her as long as I could. We made a right turn on 11st Street, which I knew we would be running on for many, many blocks. Even though I was glad to be done with turns for a while, I was also worried about how much distance remained. Knowing Downtown Oakland as I do, I tried not to look at the street names and instead looked forward to turning left at the Oakland Museum of California (OMCA). There was a bit of a headwind. Nothing crazy, but definitely noticeable. Similar to the first mile, I kept wondering if I was running too hard or not hard enough. When my watch beeped 8:10 for the second mile, I was mildly disappointed, but I felt like it was the right amount of effort for that point in the race.

Mile 3: 7:51
Concentrating on the next turn at OMCA really helped me to keep calm and focused. As I made the turn, I felt like I was on the home stretch. I took a peek at my watch and saw a faster pace (sub-8:00) and also a heart rate of 170, which was nowhere near my maximum heart rate. I decided to pick up the pace, especially on the slight downhill where Oak St. becomes Lakeside Dr. As I made the final turn up 19th St. and the dreaded (tiny) hill, I decided to make the hill my b*^%# and give it everything I had. I managed to pass Cathryn (I so desperately wanted to say something encouraging, but had no extra energy) and saw the GR cheering from the corner of my eye (again, wanted to say hi, but no extra energy).

I saw the clock ticking towards 25-minutes as I approached the finish mat. I think that the race clock read 25:00 as I crossed, but I was fairly sure that we started a few seconds after the gun. So, not only did I PR, but I finished under 25 minutes?! I ran through the mat, stopped my Garmin after a few seconds, and turned around to congratulate Cathryn. We weren’t sure of our official times, but we had given it our all and hoped for sub-25 for both of us. (Final 0.12 mile: 7:08/mile pace.) 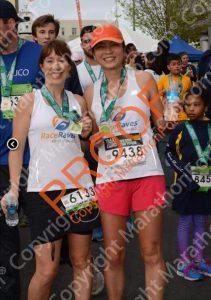 Post-race
I had signed up for race tracking, so I got emails confirming our official race times – Cathryn finished in 24:58 and I finished in 24:52! Hooray! I eventually found the GR and we reunited with his sister and dad. 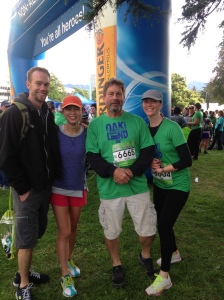 I was so elated and happy that my training paid off, that I was able to execute my race strategy, and that I stayed mentally strong throughout. This was a big race for me for so many different reasons. First of all, to PR by 33-seconds was a great feeling. Second, despite evidence to the contrary, I still think of myself as a 10:00/mile runner. I remember when I ran a single mile at 8:00 and I thought that was SO fast. To go from that mindset to running 3.1 miles at 8:00/mile is pretty cool. Finally, this was also the first time I’ve run a sub-8 minute mile in *any* race, so that was sweet. This will definitely be a race I remember for years to come!

Next up: the Oakland Half Marathon recap!