I debated for a long time about whether to get a GPS watch. On one hand, I liked running without a lot of stuff. On the other hand, I knew that GPS watches can be very useful training devices. When I was training for the 2012 Oakland Half Marathon, I initially used the RunKeeper app on my iPhone, which I found to be pretty handy especially as my runs got longer. One downside, though, was that it meant carrying my iPhone on every run that I wanted to track. Oh, and another was that I couldn’t take a quick peek at the data without stopping, getting my phone out of my Spibelt, and unlocking it. So, after a little bit of internal debate, I decided to take the plunge and get a GPS watch.

The following describes the process I used to determine which watch to get. You might want to skip ahead to the actual review if you don’t care to know the details; don’t worry, my feelings won’t be hurt. *sniff sniff*

1. Asked 3 of my trusted running friends what kind of watches they owned and how they felt about them. All 3 owned Garmins, but each owned a different model, which gave me a nice sample. All 3 were happy with their watches (minus a few minor glitches). Only one used her heart rate monitor (HRM), and mostly when she was backcountry skiing. Decided to skip the HRM, which costs an extra $50 and would be one more device to worry/think about.

2. Looked around on REI for reviews. The Timex Ironman got pretty decent reviews, so that stayed on my radar in addition to the Garmin Forerunners. I decided that I wanted something simple and without too many functions (examples: GPS-enabled altimeter, mapping capabilities on the watch, wireless connectivity), so I eliminated the 310 and above.

3. Looked online for reviews. There are whole websites dedicated to reviewing GPS watches (for example). Runner’s World was also very helpful, especially since they had videos of a few of the watches I was interested in. After watching the Timex video, I decided it had way too many buttons and was not very intuitive at all. The Garmin 210 video, on the other hand, showed a watch that seemed very straightforward to use.

4. Went back to REI (where I had a dividend to spend) to choose between the Forerunner 110 and the 210. I went with the 210 because of the interval function, which in retrospect was super worth the extra $$, allowing me to run intervals anywhere. This is especially useful since I don’t have easy access to a track. 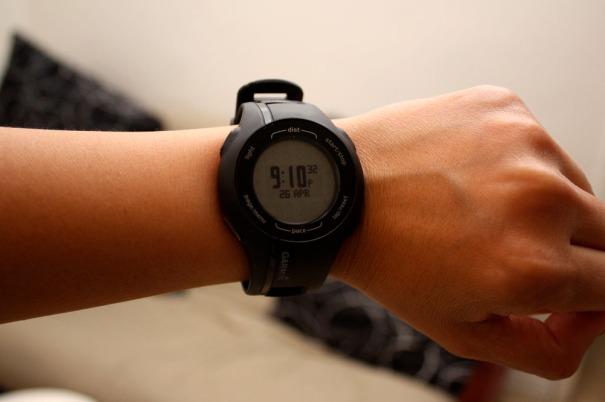 Me and my trusted running partner: the Garmin Forerunner 210.

Before I go on further, I should note that I’ve only had the Garmin Forerunner 210 for 6 weeks, so the following is based on that limited amount of experience.

PROS:
– Easy to use. Set up took about 5 minutes, and I spent another 10 perusing the user manual. Most of the functions I’ve figured out just from fiddling around with it. Very straightforward.
– GPS satellite links quickly. I think I’ve had trouble with it once or twice, but it usually finds a satellite within 1-2 minutes.
– Garmin Connect, the online software where you can upload run info, is super useful for tracking run information (distance, time, pace, GPS map, etc.) and very easy to use.

CONS:
– The USB connector is terrible. There is a 4-prong clip that hooks up to the back of the watch, which is used for charging and uploading data to the computer. There’s a lot of leeway so one can never be sure that the watch is hooked up properly. It’s not impossible; I can usually hook it up in less than a minute, but it often takes me at least 3 tries to get it hooked up. I know the higher end models have wireless ANT+ technology, so this might be a reason to choose those watches over the 210. However, it’s really not that big of a deal and frankly not worth the difference in price (to me anyway).
– “Current pace” function is useless. It appears to be the least reliable out of all of the pace functions (you can choose between current, lap, or entire run). Again, not a huge deal, and not one of my motivating factors to buy the watch.
– It’s sort of bulky, but I kinda expected that.
– Pricey. At $199, this thing better make me run faster and longer, as well as making my hair shiny and teeth whiter. Just kidding. I think it’s a good product and worth the money… I’m just not sure I would’ve gotten it had I not had REI dividends to spend.

As a side note: The Gypsy Runner recently bought (and returned) the New Balance GPS Runner watch. It was deeply flawed — not only was the GPS untrustworthy, but it didn’t even calculate the pace correctly! It also kept resetting itself to Hong Kong time, for whatever reason. The user manual was cryptic. The one pro was that it was inexpensive. That’s about it.

Update (9/27/12): Just a tip — I find that my Garmin finds the satellite MUCH faster if I stand in one location rather than move around. For instance, it usually takes 30-60 seconds to find the satellite when I’m doing a dynamic warm-up in place, whereas if I start doing a walking warm-up, it can take up to 4-5 minutes. Hope that helps!

Disclaimer: The above review is my personal opinion. I have not been compensated (in merchandise or money) to endorse these products.