Home › Gear › To monitor or not to monitor, that is the question!

To monitor or not to monitor, that is the question!

I’m pretty sure that heart rate monitors (HRM) didn’t exist back in Shakespeare’s day, but if they did, maybe he would’ve posed the question above. Before I begin, a quick disclaimer: I’m not an expert in exercise physiology. This post is my own opinion and should not be taken as advice. Consult your doctor before starting any exercise plan.

OK, now that that’s out of the way… first, why use a HRM? We all know that it’s advisable to alternate between easy runs, tempo runs, and speed intervals, but the question is: how much of each type of run should we do? Studies have found that, for runners, the magic formula seems to be 80% easy + 10% tempo or lactate threshold (LT) + 10% speed, or 80/10/10. To achieve this balance, one could use perceived exertion to quantify effort, but there’s a big problem: most people misjudge their perceived effort. They run their easy runs too hard and their hard runs too easy. One way to get around the subjective error is to use something objective — such as a HRM. HRMs don’t have egos and don’t care if you’re having a slow day. They call it like they see them (or detect them, rather). Heart rate monitoring (not necessarily with a HRM) can also be used to indicate overtraining. Interestingly, one of the physiological signs of overtraining is a higher-than-average HR upon waking up.

A diagram showing how a heart rate monitor works. (source)

Why is it important to do 80% of your runs slowly, when it’s been shown that speed begets speed? For one thing, running slowly increases your aerobic base by giving you plenty of time to build muscle and soft tissue strength, lung and heart capacity, and reinforce neuromuscular connections. An aerobic base is also supposed to be the foundation for your anaerobic workouts (i.e., intervals, speed work). Second, running slowly tells your body to tap into burning fat as fuel, instead of carbohydrates. Finally, slow running is much less stressful than fast running. You can only do so much speed work before your body gets mad at you. 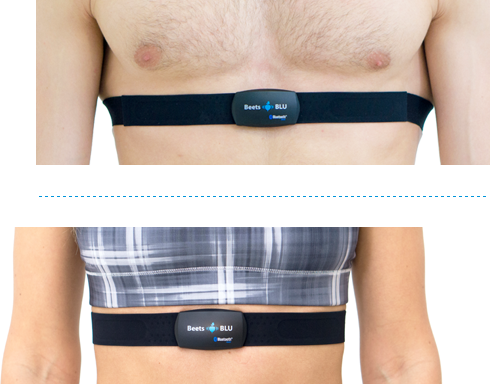 Personally, I’ve never been attracted to using a HRM until recently. The extra cost (I opted not to get one with my Garmin) and having one more thing to wear were the biggest deterrents. And then there was the inertia/laziness towards figuring out my HR zones – what a pain, right? But then I thought about the benefits (outlined above), as well as the fact that a friend of mine has made huge gains in her running since using her HRM… my resistance seemed kinda futile. Plus, RC just happened to have an extra HRM lying around, so I really didn’t have an excuse.

The thing that pushed me the edge, though, was staring at my marathon training plan and wondering, “How the heck am I going to run so many miles??” I knew I would HAVE to run most of the miles truly easy to make it to MCM in one piece. Even though I feel like I’m a decent judge of perceived effort, I also know that I sometimes allow my ego to fog my judgement, so that I end up watching my pace instead of focusing on how my body feels. I was also curious to try to corroborate the HRM data with my perceived effort to see how they aligned. My goal is not to become a slave to the HRM, but to use it as a tool — one that I’ll use for a few weeks here and there, but not for the indefinite future.

So, I borrowed RC’s HRM and started using it last week. Here’s a quick synopsis of my experiences: 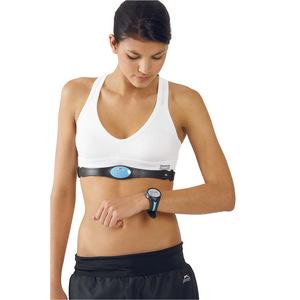 this is not me, but I have been looking down at my watch a lot this past week (source)

So far, my experience has been mixed. It’s been frustrating to work out the kinks, and on days like Saturday, when I was heading out with so much stuff (HRM, fuel belt, Spibelt), I felt burdened by my gear. On the other hand, it’s been neat to pay attention to HR instead of pace and try to reinforce my perceived effort in that HR zone. I should note that many people get frustrated with using the HRM initially because they find that their aerobic base is 2-3 minutes slower than their usual “easy” pace. I’ve been pleasantly surprised that my aerobic pace isn’t as slow as I had feared — around 10:30-11:15/mile, which is just a tad slower than my easy/recovery pace. My outlook is that I’ll continue to use the HRM on easy runs for the next few weeks, but I don’t see it being a permanent fixture of my running. We shall see!

For more on heart rate monitoring, here are some articles for your reading pleasure:

14 comments on “To monitor or not to monitor, that is the question!”