Tues: The plan was for 5 easy miles. Not only did I come up short, but I felt tired and sluggish. I guess the back-to-back runs the weekend before (especially the trail run at Briones Reservoir on Sunday) really did me in.
Stats: 4.8 miles @ 10:56/mile + 45 min core + stretching/rolling

Thurs: I was supposed to meet up with DD for an early morning track workout, but she canceled last-minute – she was up all night with her little girl, who came down with the stomach flu. Poor things! I woke up, saw her email, and went back to bed, deciding to reschedule the track workout for the afternoon.

The good news is that I did not lose my motivation and stuck with my plan to hit the track. The bad news is that it started raining moderately hard about 20 minutes after I got there. There was little to no wind, at least, so I finished my workout just fine.

My goal was to run 6 x 800 m at 5K pace or faster (or ~ 4:13 per 800 m). Intervals are one of those things that really boggles my mind. I mean, if I can run a whole 5K with an average pace of 8:26, you’d think that I’d be able to run 3 miles worth of 800’s (with rest intervals) at the same pace, right? Well, for whatever reason, my body has a really hard time with intervals. (I know that a 5K race has the added bonus of competition and adrenaline over track intervals, but I still don’t get why intervals are so tough.) My last set of 800’s were a few weeks before, when I ran 4 sets around Lake Merritt, averaging ~4:20 per 800. I remember the last 2 were super tough! So, I was a little nervous about this workout and how I’d do. Here’s the workout:

Fri: Went to the climbing gym for the first time in almost 2 weeks, followed by pizza and beer. It didn’t seem like the best thing to do before a 12-miler on Saturday morning, but whatevs.
Stats: 2 hours indoor rock climbing

Sat: Run #6 with Running for a Better Oakland (RBO). Similar to our 10 mile attempt 2 weeks ago, Alejandro started having low back pain after 7 miles. After that subsided a little, he started having significant cramping in his feet and inner quad. He was intent on finishing the distance, though, so we interspersed jogging with a lot of walking breaks. It was a good opportunity to discuss what to do if he encounters these problems on race day. I tried to fill his head with as many mantras as I could. 🙂

As much as I didn’t mind helping Alejandro endure his problems, it did hit me that I haven’t had a solid long run (over 9 miles) this whole training cycle. My confidence speed-wise is just building up, but my confidence in my endurance is pretty lacking. I’ve decided to do a 12 miler on Thursday morning with tempo intervals to test the waters. I know it’s too late to try to build endurance if I don’t have it, but at least I’ll go into the race knowing what I’m capable of.

Later on Saturday, I met up with fellow Bay Area blogger Cathryn and her son for coffee in Berkeley. We haven’t seen each other in person since Healdsburg, and it was great to catch up and also to see each other in non-running clothes. 🙂 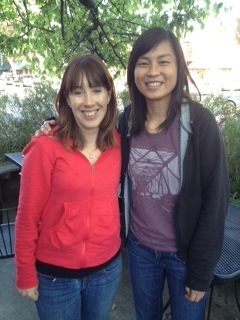 Cathryn and me  in my old ‘hood! (Photo courtesy of Cathryn)

Saturday night, the Gypsy Runner and I went to the Golden State Warriors game. Even though they lost, it was still really fun. It definitely helped that we got incredible tickets in the 8th row, thanks to the GR’s buddy. 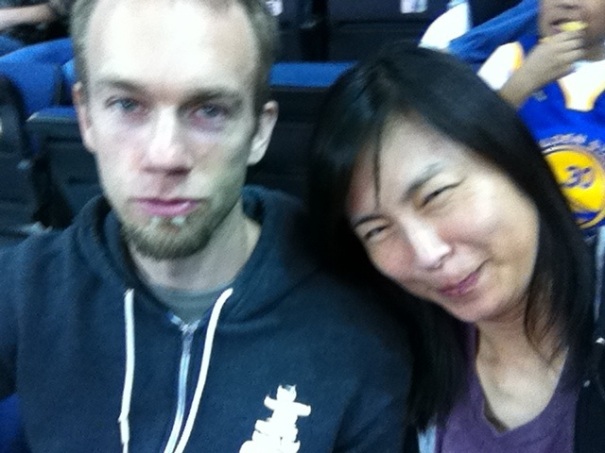 Did I mention that we’re basically the worst at taking iPhone pictures of ourselves?

Sun: REST. Well, sort of… does spectating count? The Gypsy Runner, his sister LJ, and his dad RC ran the 408K in San Jose. It was an 8K race benefiting the Pat Tillman Foundation. It seemed like a fairly well-organized race, but I had one major gripe: who schedules a race on the day of Daylight Savings Time?? The 8am start meant that we had to wake up around 5-5:30 DST (i.e. 4-4:30 real time), drive down to Castro Valley to pick up LJ and RC, and drive to San Jose to drop the runners off at the start. Then, I drove myself over to Santana Row, an upscale, outdoor mall, which was also the finish line of the race. I parked and quickly located the nearest Starbucks so that I could get my caffeine fix.

This year’s race had close to 5000 registered runners, so they split the runners up into corrals. The Gypsy Runner was originally in Corral B, but when he got to the start, he found out that Corral B was for ~8:00/mile pace or slower. Since he was aiming for 6:30-7:00, they let him into the A corral. The only “problem” is that I was expecting him to start at 8:05 (Corral B), not 8:00 (Corral A), and was therefore projecting to start looking for him around 8:35. Well, imagine my surprise when, around 8:32, I see him hauling butt down toward the finish line! I didn’t even have time to get my camera out. Oh well. He ended up with a time of 32:26, which was good for 41st place overall (out of ~3700 runners) and 9th out of 282 in his age group! (Yes, I’m a very proud girlfriend!!)

Don’t mistake this for a Lululemon ad.

RC was hoping for sub-10 minute miles and ended up running the 8K in 45:54 (9:14/mile)! LJ aimed to come in less than an hour, and totally killed it by finishing in 54:46. So, a great success overall! We celebrated by having a very delicious brunch at Aqui. (Sorry, no pictures of my breakfast burrito, but trust me, it was great! I wish they had an Aqui closer to Oakland.)

The Gypsy Runner and his victorious clan.

WEEKLY TOTAL: 24.9 miles + 4.75+ hours strengthening/PT/stretching
How I felt about it: A pretty good running week, but a little slack on the other stuff… but not too bad. B